Latvia’s largest and most popular youth Volleyball competition, the Lases Cup, was completed this past Saturday for what was the twelve edtion since that special Volleyball festival was first introduced. This year all records in terms of entries were broken while the country’s Head of State, Mr. Andris Berzins, was also in attendance. 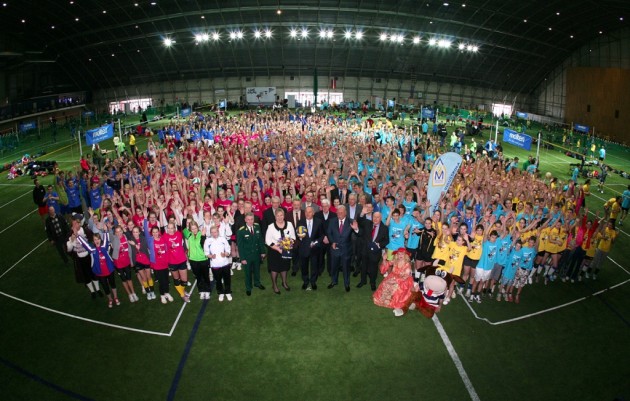 The competition was split into two rounds: everything got started this past September all across Latvia with a series of qualification matches that were joined by almost 7,000 players and did run up to late March. The children did compete in twpo different age groups, especially conceived for those attending primary and secondary schools (born in 1997-2000 and 1993-1996 respectively).

The final round was joined by the winners of the prelims for a total of 116 teams plus two more from neighboring Estonia, i.e. Lahte Gymnasium and Haademeeste school. More than 1,300 players were involved in the matches of the final round with a total of 16 Volleyball courts set up in the arena that hosted the event in Latvia’s capital city.

Latvia’s Head of State Andris Berzins was there to officially kickstart the competition; a former Volleyball player in his youth, Mr. Berzins was evidently more than happy to see so many kids come together for a Volleyball competition that has turned into a major festival and real tradition.

He was accompanied by Latvia’s best Volleyball players in present times, i.e. Gundars and Armands Celitans, who currently play in Italy (Casa MODENA) and France (PARIS Volley) respectively. The Celitans brothers are members of Latvia’s national team that this coming May will be trying to qualify for the final round of the European Championship by playing Turkey in the third and last stage of the prelims. Gundars Celitans – who stands at 202 cm – did also participate in the Lases Cup some years ago before he eventually embarked on a career as professional Volleyball player.

The Lases Cup is much more than a purely Volleyball festival, as children are invited to join a series of side activities and special contests. This year the event was organized by the Latvian Volleyball Federation in close cooperation with the „World of Munchausen” and the Riga City Council.

DEN M: Join the grand volleyball get together in Fælledparken