After edging Turkey and sharing wins in their two matches with the Netherlands, the home heroes of Belgium around head coach Dominique Baeyens feel confident as they finalize their preparations for the first round of the 2014 FIVB World Championship coming up this weekend in Kortrijk. 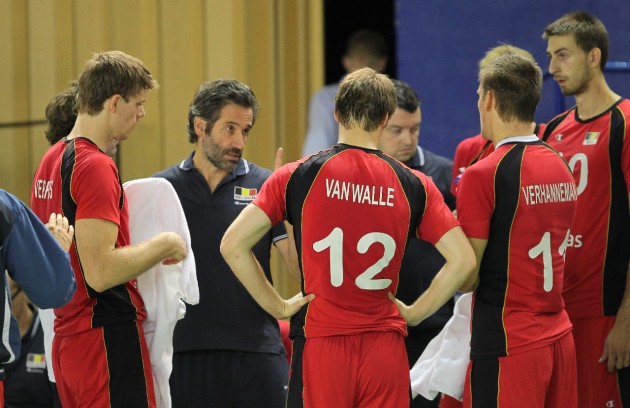 “With all my respect for the players and the team, Northern Ireland shall not pose any threat to us” Baeyens continues. “They are the underdog of this group”.

Baeyens – who previously coached the teams of ZELLIK and Knack ROESELARE – is more afraid of Austria and Romania, the remaining teams set to compete this weekend in Kortrijk. “I have seen recent videos of the Austrian team and must admit I was positively surprised. Thomas Zass is an opposite player with good experience for he played this season Champions League for the likes of VfB FRIEDRICHSHAFEN. Some more players from Hypo Tirol INNSBRUCK also have got that same international background. They have progressed a lot in the past few years but we shall be able to edge them by exploiting the home advantage and the quality of our team” he stresses.

As for Romania Baeyens says: “They have got a very good tradition in Volleyball and they would normally be seen as our toughest competitor. However, they lack consistency and it is difficult to make a prediction about their performance. I think we shall rather focus on our own skills and try to get first place in the Pool to advance directly to the third qualification round scheduled for January 2014”.