WCQ W: Easy wins for Slovakia and Greece on opening day in Poprad

Slovakia and Greece started on Friday their World Championship campaign by scoring two straight wins in the first day of action in Poprad. Read latest volleyball news on Worldofvolley.com. 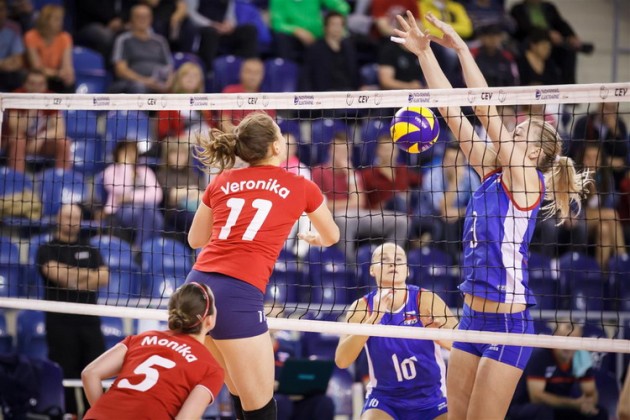 Greece opened the program of the tournament playing Austria; the Austrians scored seven points in a row in the first set to move up 16:13 but Greece fought their way back to finish it off at 25-23. Greece controlled the game all the way through the second set while in the third Austria could compensate for a slow start to draw level at 21 but it was not enough to avoid a straight defeat.

“I am happy that we won in three sets; on the other side I have seen many things where we can improve on” Greece’s head coach Ioannis Kalmazidis said. “I hope we can improve match after match. Technically speaking we did a good job but we still have to accelerate the pace of the game. This is normal because we did not play any match before this tournament” he continued. “It was the very first match for a team that was just assembled. There were some good moments but our players looked nervous” Austria’s mentor Zuzana Tlstovicova commented. “We can play better and I am a little disappointed. I expected more from my players”.

Eleni Kiosi paced Greece with 14 points while Srna Markovic top scored in the game with 17 for Austria.

In the other match of the day the home heroines of Slovakia used their second lines to easily edge Liechtenstein in straight sets. Though the guests played with glowing hearts, the difference in quality and physical skills was too big. Slovakia was better in every aspect of the game and could win in three sets. “I am glad that my players could follow the plan we had worked out and that they controlled the game. We have confirmed our role of pre-favorite in this tournament and I am happy that my players did not underestimate the opponent. Tomorrow it will be more difficult with Austria but I hope that we will win” Slovak head coach Miroslav Cada said.

“Our target was to score at least 30 points; we got 29 in the end, so we are satisfied. The Slovak team stands at a totally different level and it is very hard to play with them. We are here to get some experience and this is our main goal” Liechtenstein assistant coach Swen Mallschützke said. Claudia Hasler registered 6 points for the guests while middle-blocker Veronika Hroncekova paced Slovakia in their winning effort with 14.