Serbia beat Cuba in four sets in the first match of the World League’s Pool B in Havana on Friday. The Ciudad Deportiva Coliseum was sold out as the hosts faced the current European champions. Aleksandar Atanasijevic (SRB) 22 points, Raydel Fundora and Yordan Bisset were the top scorers. 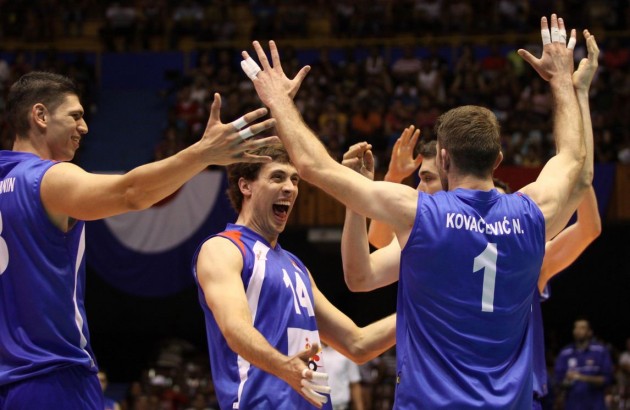 The first set was hard fought, with the Serbians ahead at the initial technical timeout, the visitors scoring six points in a row with captain Dragan Stankovic serving. A huge block from Idel Mesa lifted the Cubans, but the Europeans looked more coordinated on court. Nemanja Petric scored an ace, and later the visitors blocked all attacks from the Cuban side. Serbia finally took the set 25-17 thanks to an outstanding ace from Marko Ivovic.

In the second set, the Caribbean squad tried to regroup while being led by Estrada and Mesa, its most experienced players, and were ahead 8-7 at the first break. Then, the blue vests of the visitors counterattacked and were 16-12 up at the second TTO. Many ups and downs followed but Cuba couldn’t overtake the European side.

Serbia seemed to be the favourites to prevail in the third set after going 8-6 up, but the islanders demonstrated their resolve by taking the set 25-21, with good serving by Rolando Cepeda and improved blocking.

Serbia took a narrow 8-7 lead in the fourth but then moved ahead and were 16-11 up at the second TTO, allowing them to cruise to victory.

WCQ M: Cyprus within reach from qualifying for the next round

GP: They can save everything, except for…...