WCQ M: Cyprus within reach from qualifying for the next round

The men’s national team of Cyprus shut out Scotland on the second competition day in Pool G of the 1st Round European Qualification for the 2014 FIVB Volleyball World Championship - Men. Luxembourg defeated San Marino in straight sets. Arnaud Maroldt, Matteo Zonzini, Gabriel Georgiou and Jamie McHardy were the top scorers. 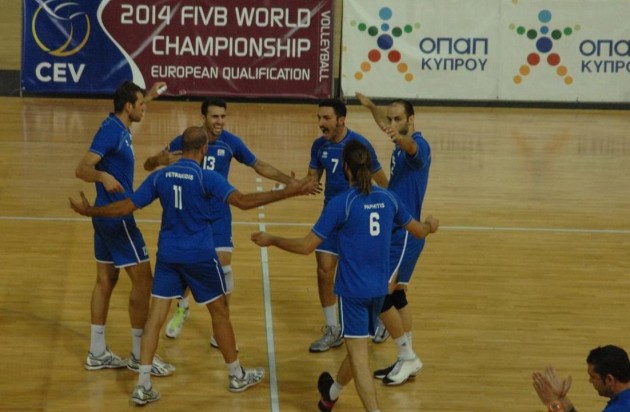 Luxembourg crushed San Marino in straight sets to stay alive in the quest for a qualifying berth at the World Championship.  Arnaud Maroldt was top scorer of the match, with a total of 14 points for the winning team. Matteo Zonzini tallied 8 points for San Marino.

The first set was a walkover, with Luxembourg gaining an early lead and widening it as the game progressed. San Marino kept the score close in the beginning of the second, but eventually the players from the Grand Duchy broke away to lead by four points at the second technical time-out. The third set was more of the same, with Luxembourg leading throughout the match to sail to a comfortable overall victory.

Attacking success rate was the deciding factor of the match, with Luxembourg scoring 50% in offense and San Marino restricted to just 31%.

Burkhard Disch, head coach of Luxembourg: “Last week at the Games of the Small States of Europe in Luxembourg we played against San Marino in front of 2000 spectators and we lost by 2:3. Today we faced a different team, but we were concentrated and we won even without playing our best volleyball.“

In the direct clash between the two unbeaten teams from yesterday, Cyprus overpowered Scotland in straight sets. Gabriel Georgiou led the home side in scoring, contributing as many as 20 points to his team’s total. Jamie McHardy was Scotland’s best scorer with 13 points. Cyprus countered Scotland’s strong serving (seven aces) with better blocking (11 points) and more successful attacking (55%).

In the first set, the most closely-disputed of the tournament so far, Cyprus could not hold on to a 20-16 lead and allowed Scotland to tie the score at 20-20. Again Cyprus took the lead by two points at 22-20, but it was Scotland that reached the first set point at 23-24. This was promptly cancelled by a side-out and then Cyprus had three set points of its own before finally clinching the set on an unforced Scottish error for 28-26. It was exactly the opposite in the second set, with Scotland gaining a five-point lead at 17-12, before Cyprus came back to tie the score at 18-18 and go on to close the set at 25-22.  Cyprus took a clear lead throughout the third set to eventually win by 25-19 and score a clean-sweep victory – its twelfth in thirteen head-to-head encounters with Scotland.

Kostas Delikostas, head coach of Cyprus: “We played well, without this meaning that we cannot play better. We were very efficient at break-point and that is what made the difference today.  I have a feeling that our opponents may have slightly underestimated us, due to our performance on the opening day.“

Scotland now play San Marino on Saturday, the closing day of the tournament, at 16:00 EET, while Cyprus takes on archrivals Luxembourg at 19:00 EET.