Defending champions United States breezed past Trinidad & Tobago 3-0 (25-13, 25-12, 25-13) in the second match of Pool A. Lauren Gibbenmeyer led USA with 11 points, including three blocks, while Kristin Hildebrand added 10. Nicole Fawcett had 6 aces among her nine points and Rachel Adams had 8 points with four blocks. 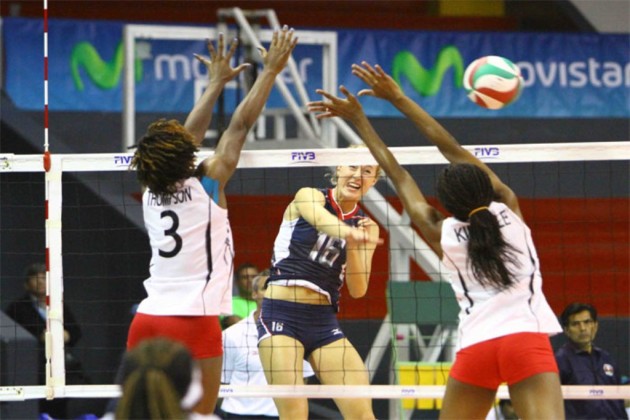 The Americans established a fast tempo and balanced attack while dominating in blockings (13-4) and service aces (9-0).

Lauren Gibbenmeyer led USA with 11 points, including three blocks, while Kristin Hildebrand added 10. Nicole Fawcett had 6 aces among her nine points and Rachel Adams had 8 points with four blocks.

“I am very proud of the new players on the team and the way they performed in their first international competition,” said USA captain Kristin Hildenbrand. “We passed and served very well.”

“We were a little nervous playing against a team like USA and the fast rhythm established by USA was new for us,” Trinidad & Tobago Krystle Esdelle said.

“I liked the way the Trinidadians enjoyed the match,” USA coach Karch Kiraly said. “We have many new players because after the Olympics some players needed to rest and other players have to step in.”

“It was not surprising for us given the quality of USA as major powerhouse,” Trinidad & Tobago coach Francisco Cruz stated. “Overall I am satisfied with the performance and we gave playing opportunity to some young players.”

Darlene Ramdin paced Trinidad & Tobago with 10 points, while no other player scored more than five points.

To read more news from this competition click on Pan American Cup 2013.