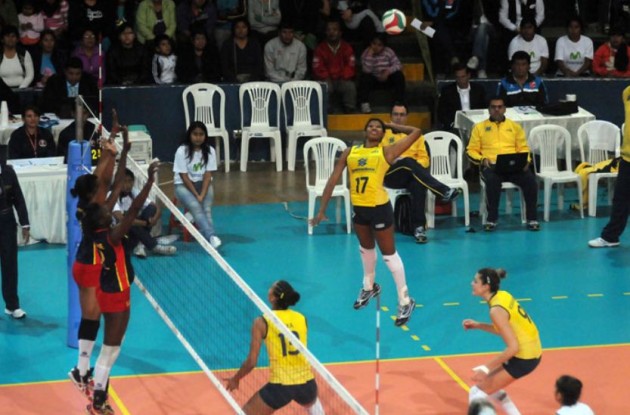 Gabriela Braga Guimaraes finished with 17 points to be the best scorer, while Sara Silva Aparecida registered 15, both for Brazil. Colombian Maria Margarita Martinez finished with 13 and Melissa Rangel with 9.

The Brazilians totaled 13 blocks against 4 scored by the Colombians. Both teams finished with 4 aces and the winners made 16 errors to 21 by the losers.

“It was a very important match for us as we worked hard in attack and with a very strong service. It was difficult for us in the second set, but we came back. It was interesting because we were two young teams of the same age, in preparation for the world championship”, said Rosamaria Montibeller the Brazilian captain.

“Part of our team is too young, I am here to support my teammates at the Cup, it is part of their learning experience,” mentioned Captain Lorena Zuleta, who played only in the second set, when Colombia had its best moment.

“Our goal was to qualify to the second round, and to reach the semifinals. This cup is a great stage in terms of preparation and for the girls to be focused, to get rid of pressure as the tournament goes by,” stated Brazilian coach Luizomar de Moura.

“In the psychological part I think they were afraid of playing strong teams, that is part of the growing process, we gave a lot of concessions, but you can’t do that when you are about to play a world championship,” said Mauro Marasciulo, coach of Colombia.