In Gary Sato’s first home game as coach of Japan, the American had the full support of the crowd behind him at Komaki Park Arena, cheering him and his team on to a tough 3–1 win (25–17, 25–18, 24–26, 25–18) against Finland in the FIVB World League. This and other volleyball news read on Worldofvolley.com. 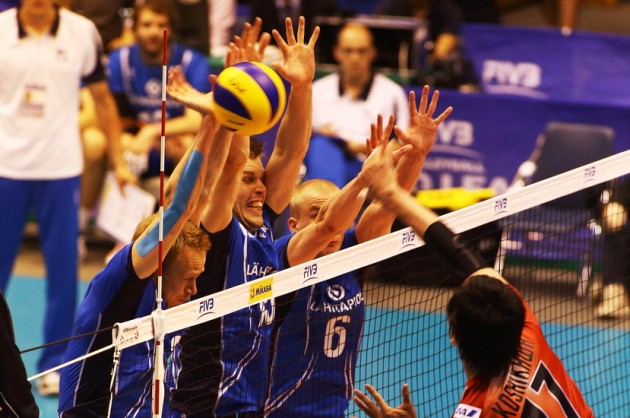 Japan were led by the high-flying Tatsuya Fukuzawa (19 points) and Yu Koshikawa (15). Finland were led by their captain, Antti Siltala, who notched 16 points, and the Oivanen brothers, Mikko and Matti, who had 15 and 14, respectively.

The teams felt each other out early on, exchanging the first few points until Japan’s hometown crowd urged them on to an 11–5 lead with a run that included great blocks from Daisuke Yako and Kota Yamamura. Finland’s fiery captain Siltala helped his team back to within three (18–15) with a pair of hard drives, but Fukuzawa and Daisuke Yako proved too strong on the wings, bringing an offensive flurry late to close out the first set 25-17 on a four-point run.

The second set was a much closer affair, with neither team holding more than a two-point lead until Yako helped Japan edge out to 19–15 with a hard crosscourt spike. Kazuyoshi Yokota served up an ace to give the home side a set point, and captain Yamamura clinched the set 25–18 with his fourth block of the match.

Finland’s Siltala helped his side to 7–6 with an ace in the third, but Japan’s Koshikawa was hot for the home side, pitching in four early points to help Japan bounce back to a 10–7 lead. Jukka Lehtonen and Mikko Oivanen brought Finland even again at 15–15 with great play at the net. Japan looked poised to take the match after a Koshikawa spike made it 23–21, but Matti and Mikko Oivanen played well at the net (four points each in the set), and a tip from Mikko gave Finland the set 26–24.

Matti Oivanen was serving great to start the first, helping Finland ahead 6–2 with an ace. But three errors mid-set let Japan bounce back with a pair of aces from Yusuke “Gottsu” Ishijima off the bench and Koshikawa bringing them even at 15–15. Some hometown luck at the net let Japan move up to 19–16, and from there a Fukuzawa spike clinched the set and the match for Japan.