On the eve of the opening encounters of the NORCECA Group N Men’s World Championship Qualification Tournament, team Honduras is confident of winning the group as they came here with that as their main purpose. This was the view expressed by team coach Francisco Rojas. 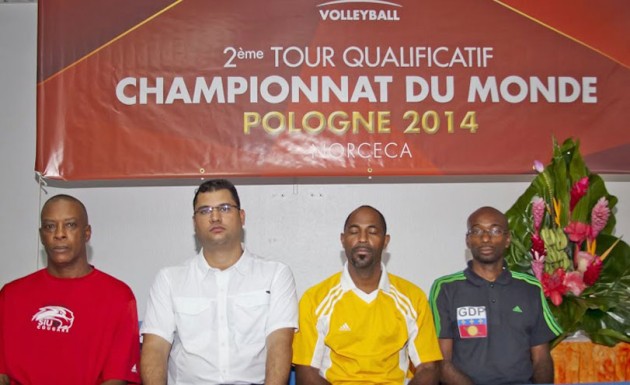 “Having captured gold in the Central American tournament we did not come here to let our guard down but we are prepared to take first place“, he said.

“We don’t know much about the other teams in this zone but we have about 80% of the players that  won the gold medal and we expect to live up to our reputation“, he concluded.

Home team Guadeloupe acknowledged that Honduras is a powerful team but suggested that home court advantage will play a role.

“We will be playing at home in front our home fans so we will give it our very best shot“, said team coach Oliver Ismael.

“Our preparations have been good coming out of a tough zone and now we have no choice but to do our utmost“, added team captain Loic Couchy.

Dominica’s coach Robert Guiste noted that this was the first time that they had advanced to the second round of the World Qualifying tournament.

“This time around we have a good mix of youth and experienced players and they are prepared to fight to the end, we will not go down easy,” he concluded.

Team Grenada accepted the title of underdogs and coach Raphel Bratwaite thinks that this can work in their favour.

“The players are not under any pressure, the vast majority are young players and so they can fearlessly express their talents in all departments of the game. Dogs bite!” he warned.

The group qualifying tournament opens with home team Guadeloupe playing against Grenada at 9:00 at the Paul Chonchon Stadium on Saturday.