Jeyson Flores and captain Oscar Daniel Garcia led a balanced Guatemala attack to a hard fought 3-1 triumph over hosts Suriname to win the NORCECA Men’s Group M Tournament advancing to the third round towards the 2014 FIVB World Volleyball Championship in Poland. 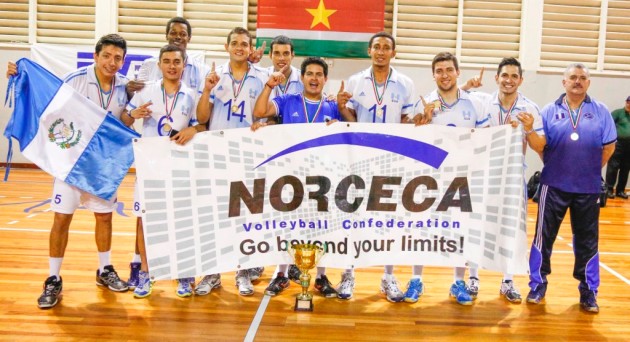 Less than 12 hours earlier, Guatemala had also defeated the host country 3-0 to reach the final, and once there, the Central Americans withstood a determined challenge from the hosts, winning the critical points to secure their lone automatic ticket from the group to the third round.

Flores and Garcia, both ended with 15 points while the duo of Moises Santos and Andy Leonardo also chipped in with ten points each.

Despite being shorter in height, and being out blocked 14-2 and out served 4-2, what the

Guatemalans lacked in power, they made up with accuracy as they only committed 19 errors to Suriname’s 32, which proved vital in the end result.

For Suriname which faltered in the closing stages of the sets, Gino Naarden with 23 points, and Keven Sporkslede, with 22, were the game’s top two scorers.

At the end of the preliminary phase, Guatemala, Suriname and Martinique all finished the preliminary round with 2-1 win-loss records and 10 points and this meant the top two teams needed to be decided on the points-ratio differential which saw Suriname’s 1.231 to lead the table ahead of fellow finalist Guatemala (1.214) while Martinique (1.121) was third and had to face Anguilla for bronze.

In the other matches of Sunday:

Martinique registered a second straight 3-0 (25-18, 25-12, 25-16) defeat of Anguilla to take the bronze medal. Leading the way for Martinique which dominated on spikes 25-19, blocks 6-5 and service aces, 9-0 was Edouard Lowinsky with 14 points, while Brice Hardy-Dessources got 10, with three service aces and two blocks. Sherwin Richardson was the top scorer for Anguilla with ten points, while Calvin Samuel got eight.

Martinique swept past Anguilla 3-0 (25-11, 25-17, 25-16) to keep alive its chances of a spot in the gold medal match. Martinique was led by 13 points from Brice Hardy-Dessources which included three blocks, and 10 from Gregory Alpha. Aymeric Christine chipped in with eight points. Martinique dominated its rival on spikes, 29-16, and on aces, 11-4 but were outdone on blocks 4-7.

Captain Oscar Daniel Garcia led three players in double-figure scoring as Guatemala put on its best performance in three matches, beating hosts Suriname 25-17, 25-18, 25-23 to reach the gold medal. Garcia tallied 12 points, while Andy Leonardo and Jeyson Flores each got 10 points. Keven Sporkslede, who has been used mainly off the bench due to an injury, led all scorers with 18 points, while Gino Naarden got nine.