Honduras shrugged off an earlier defeat to Guadeloupe to win Group N of the NORCECA World Championship Tournament in convincing and comprehensive manner 3-0 in the finals. Carlos Osario lived up to his billing as a top player with 18 points as the Central American jumped out to sizeable leads in each game and never looked back. Evans Torres was his aide with 10 points of his own. 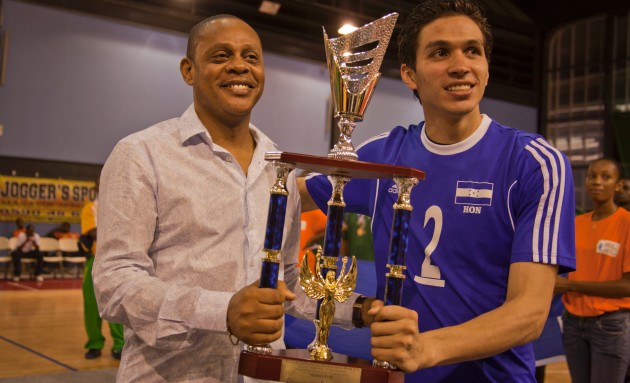 The gold medal match was interestingly set up when Guadeloupe beat Honduras 3-2   preliminary round and both coaches promised a different showing for the final game and it certainly was.

Carlos Osario lived up to his billing as a top player with 18 points as the Central American jumped out to sizeable leads in each game and never looked back. Evans Torres was his aide with 10 points of his own.

For Guadeloupe Alexandre Watson and Heinrick Perrot ignited the crowd whenever they spiked but this was only 10 times when they each had 5 effective spikes.

Honduras qualified automatically for the next round of matches while Guadeloupe has to await some other group results before it could be assured of one of the four best second place finishers.

In the other matches of Sunday:

Dominica confirmed the 3rd place position when they defeated Grenada for the second time in the tournament this time in straight sets (25-14, 25-21, 25-19). The winners varied their attack with almost everyone chipping in to score points. Kenworth Bedminister was the leader with 7 and Lincoln Riviere helped him with 6 points. David Toussaint and Kerwin George joined forces to add 10 points to the victorious cause. Grenada too looked everywhere to gain points. In the end, three players (Akim Andrews, Jonell Phillip and Dominic Pierre) tallied 6 each but their efforts were not enough as they ended the tournament winless.

Dominica came from a set down to defeat Grenada 3-1 (21-25, 25-17, 25-22 and 25-19) in the 5th match of the event. Team Dominica had three guys in Lincoln Riviere, David Toussaint and Julian Seraphine leading the offense with 7 points each. Team Grenada’s Dominic Pierre got a match-high 12 points while being assisted by Jonell Phillip with 11 points.

Urged on by a chanting home crowd Guadeloupe clawed their way back from 2 sets down to defeat group favorites Honduras in five sets (14- 25, 20-25, 25- 22, 25-18, 15-12) in the final match of the preliminary round. Home boy Marcelle Mickael was outstanding as the leading scorer with 18 points that included 3 service aces and 2 defiant blocks. Saha Ludovic gave a solid support with 17 points. Useful contributions came from Perrot Heindrick (13) and Alexandre Watson (10) who combined for 23 points. Evans Torres 15 points had the most for the losers who seemed invincible up until that point.