The home heroes of Israel caused the real sensation of the day in Ra’anana as they edged Pool C leaders Croatia 3:2 after coming back from two sets down (18-21, 15-21, 21-15, 24-22, and 15-10) to claim their first victory in this year’s CEV Volleyball European League. This and other volleyball news read on Worldofvolley.com. 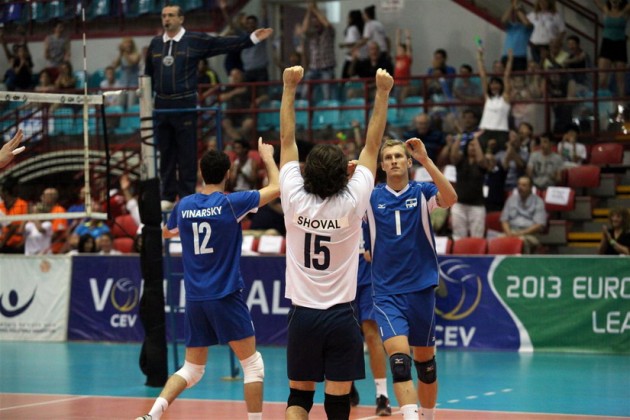 In spite of this defeat Croatia keeps the leadership in the Pool with 10 points, while Turkey – after losing today in five sets to Belarus – is ranked second with seven.

After losing to Croatia in straight sets this past week in Rovinj, the expectations around the team coached by Zohar Bar Netzer were high in Ra’anana. Croatia – that was cheered from the stands by their Consul to Israel, Tiha Krce – started out very motivated but the score remained very close in the early phases of the first set. Israel got to the front (14:12, 16:14) after the technical time-out but Croatia could draw level at 18 before taking over control of the operations in the final rush (18-21).

The guests did show good momentum also in set 2 going up 6:4 and 14:12, before speeding up the operations for the provisional 0:2 (15-21). Still Israel did show great determination in the third set storming out to an 8:2 lead there, keeping control of the operations at the technical time-out (12:6) and moving up 19:12 before finishing it off at 21-15. The hosts did stretch that positive trend also to the early phases of the fourth set (7:5), playing with good quality and focus before Croatia came back right in the end with the score evened at 21 and 22. However, the Israelis did show great energy to score the next couple of points and call for the tie-break. There they started out strong leading the way 8:3 as teams changed sides of the court and finishing it at 15-10 for a well-deserved home victory.

“We are more than happy with this win especially because we have a young team and this represents a great boost of confidence for the future” Israel’s head coach Bar Netzer said.

“We played very bad today and gave a chance to our opponents who knew how to exploit it” commented Croatia’s mentor Igor Simuncic.

Ivan Raic top scored in the game with 22 points while Tamir Hershko paced the home side with 14.