In the other match of the day in prelim Pool A of the 2013 CEV Volleyball European League – Men, Slovakia claimed their second victory of the competition by seeing off the hosts of Denmark 3:1 (21-14, 25-23, 19-21, and 21-12). This and other volleyball news read on Worldofvolley.com. 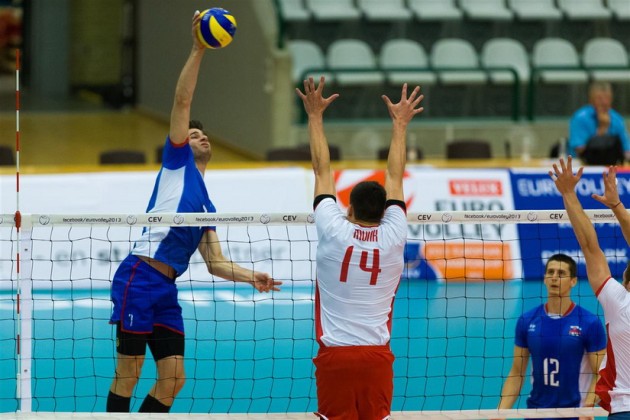 Slovakia could survive to three set balls for Denmark in the second set before eventually cruising to that much needed victory to stay in contention for a spot in the final four. Slovakia did immediately set the tone of the game storming out to a 4:0 lead in the first set but Denmark fought back to level at 4. Slovakia moved up 11:7 right before the technical time-out and then could keep a good margin (15:10) to bring it home at 21-14 helped by some Danish mistakes.

Slovakia’s head coach Stefan Chrtiansky called for his first time-out in the second set as his side was trailing 3:5 and Slovakia could flip the score around going up 9:7 and 12:9. With a series of good serves by their youngster Peter Trolle Bonnesen, Denmark did claw back for the 15 all and even went to the front at 18:16; the hosts had two set balls but did not cash any before Slovakia finished it off at 25-23 for the provisional 2:0.

With Slovakia leading 7:3 in the third set, home coach Fred Sturm stopped the game and his guys responded well leveling the score at 8 all. Slovakia moved up 12:10 but Denmark was able to flip the charts around once more before the score was leveled at 16. A triple block by the Danes set the tone for the final rush with the home side up by two points (18:16) and though Slovakia made it 18 all, this time Denmark did not lose control of the game and wrapped it up at 21-19.

After a close start, Slovakia got control of the operations in the fourth set (6:3, 9:4) and did gradually widen the gap after the technical time-out to finish the game at 21-12 for a 3:1 victory.

“This victory is extremely important for us as we are still in contention for the top positions in the Pool” Slovakia’s head coach Stefan Chrtiansky says. “After losing yesterday to Austria all of my players felt really down but with this victory we are back on track. Finally we could play our game and we are more relaxed as we take on Belgium tomorrow”.

“It feels good to win. The European League did not start as we had imagined so right now we are very happy with every point we can take home” added his son Stefan jr. “With the three points we got today we are still in contention for the top of the group and can chase Belgium and Austria. We struggled to find our best game but we got good feelings also for the upcoming matches”.