DOL sets the tone for another season of world-class Volleyball

The much anticipated Drawing of Lots for the 2014 CEV Volleyball Champions League was carried out on Friday evening at UNIQA Tower in Vienna where the 28 men’s and 24 women’s teams participating in Europe’s elite competition got to know their opponents for the League Round which is set to start in late October. This and other volleyball news read on Worldofvolley.com. 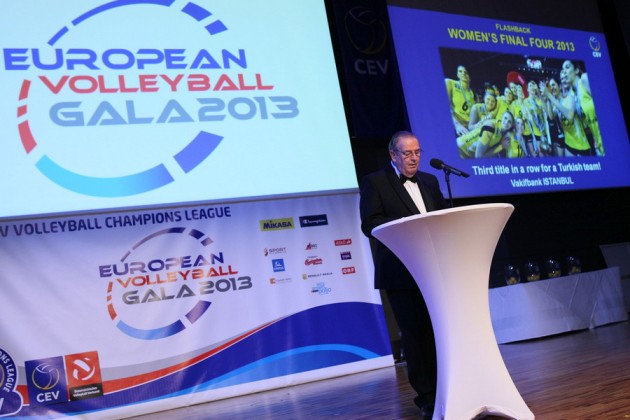 The DOL was preceded by a speech given by CEV President André Meyer who addressed the many guests and the representatives of the clubs by recapping facts and figures of the past year and looking forward to another memorable season which is set to get started on October 22.

Mr. Meyer took this opportunity also to identify some of the main features that the CEV Volleyball Champions League stands out for: “This competition is well-known for the unique emotions it does contribute to everyone involved, from the players to the coaches, all the way to the supporters and each one of our loyal Volleyball enthusiasts. Even those players who have been part of the show for many years are always waiting for this competition to come to get to feel its fabulous atmosphere and ambiance. On the other hand, the CEV Volleyball Champions League also stands as a synonym for beauty: the beauty of our athletes, but also of their actions and of the technical skills they showcase once they square off”.

Looking back at the past season that did see Lokomotiv NOVOSIBIRSK and Vakifbank ISTANBUL come out on top of the charts, the CEV President summed up figures that clearly testify the uniqueness of this competition: “The attendance in the sports halls and the TV audience do not stop to grow and we have been able to expand our horizons well beyond Europe with the CEV Volleyball Champions League being aired also in Asia on a regular basis. We have been working on the quality of the TV production and also continued with our live streaming on the web where thousands of fans are tuning in to follow the actions of their favourite players”.

The CEV does share this success with the participating clubs as Mr. Meyer recalled on Friday night: “The past season broke many records but probably the figure that most of you will remember deals with the prize money. In the end CEV distributed 1.6 million € to the 52 participating teams with an increase by 400’000 € from the previous season! This clearly shows our commitment to reward your work, your dedication and your contribution to the tremendous success of our competition”.

After that the DOL was carried out under the supervision of ECC President Riet Ooms. The 28 men’s and 24 women’s teams were drawn by taking into account the position of their respective National Federation on the latest version of the European Ranking List. For the very first time ever, teams having received a wild-card could – potentially – be drawn in the same Pool of other clubs from their country.

The results of the DOL read as follows (a detailed match calendar is available in the PDF file attached at the bottom of this news):

In the women’s competition the first and second-placed teams of each pool will advance to the Playoffs 12; in the men’s tournament, all first-ranked teams and the five second-placed teams with the best score will make it to the Playoffs and re-start from there their quest for a spot in the final four scheduled for March 2014. The organizers of the final four will be known at the end of the League Round – before the Christmas break – and as hosts will be directly qualified for the final stage of the competition.

“We have plenty of world-class matches ahead and 11 weeks of classy actions all over Europe” commented CEV President André Meyer after the DOL was completed. “More than 200 matches are coming up starting from late October and all the way through the finals in March we will be watching out for the best sides to emerge as the contenders for the crown”.

The Gala was also a very good opportunity to reward the good work done by the clubs this past year. Germany’s BERLIN Recycling Volleys and Poland’s Atom Trefl SOPOT were awarded as “best organizers” for the great job they did in every single home match they hosted and for that reason they both received a check 8,000 € worth. The Max-Schmeling-Halle in Berlin did see attendance records being broken a few times this past year with 6,821 fans there for the Playoffs 12 game against Russia’s Zenit KAZAN while the ERGO Arena in Gdansk-Sopot was literally the “place to be” for all Volleyball enthusiasts and not only for the supporters of Atom Trefl.

On the other hand, Belgium’s Noliko MAASEIK and Turkey’s Eczacibasi VitrA ISTANBUL were the winners of the 2013 Press Award – 6,500 € worth – for the excellent work these clubs did in feeding the CEV website, in liaising with the media and with their PR campaigns.

Last but not least, the Austrian Volleyball Federation (OeVV) and promoter ACTS did use the Gala as an opportunity to promote the 2013 CEV Beach Volleyball European Championship Final scheduled for late July in Klagenfurt. This city is internationally known as a real Beach Volleyball “Mecca” having hosted major international events for the past sixteen years, with the last editions of the FIVB Grand Slam having been visited – on average – by some 130’000 people. This time Klagenfurt will play host to the real highlight of the European summer season with 32 duos per genders that will be fighting for the medals as well as for the always appealing prize money at stake.

“It is evidently a real honour for the CEV to be able to organize the 2013 Beach Volleyball European Championship in Klagenfurt” proudly said CEV President André Meyer. “The unique atmosphere and the incredible audience that every year comes together there in Klagenfurt to follow the competition are worldwide known. After the very successful European Championship we celebrated last year in The Hague, I am absolutely convinced that the first-class work always delivered by the local organizers will provide us with a memorable competition. I already look forward to the days where Europe’s Beach Volleyball elite will be battling for the medals in the splendid scenario of the Wörthersee” he concluded.

Podraščanin exclusively for WoV – “Another year in Lube, then off to Brazil”