Podraščanin exclusively for WoV – “Another year in Lube, then off to Brazil”

Marko Podraščanin has the duty and the honor to lead one of the most talented generations of Serbian volleyball players. 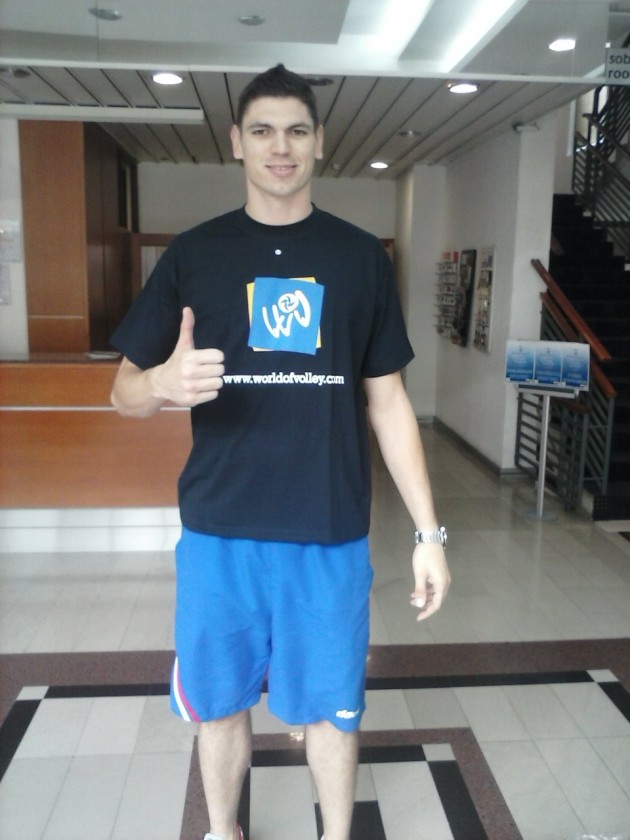 For the beginning, Podraščanin will lead them in the 2013 FIVB World League, soon afterward in the 2013 CEV European Championship and later in the 2016 Olympics in Rio.

This weekend, Serbia are expecting a double program against Germany (Saturday, June 29 and Sunday, June 30, 20:00 CET) which will determine their advancement for the Final tournament.

“Honestly, I’m happy that we will play in front of our fans after playing three games away and having long-distance journeys. We need their support,” said Serbia national team middle blocker.

“We are familiar with the quality of the Germans, we have two players who play there. We often meet them in important moments, such as at the Olympics in London when they beat us so there is a big debt that we need to collect from back then. We have the strength to play them, although they are better on paper. We will not surrender,” Podraščanin added.

How do you assess the quality and potential of the young team of Serbia?

“From the youngest guys, who were junior and youth world champions, we really expect much. I think of Uroš Kovačević, Brđović, Atanasijević, Jovović and, of course, Lisinac. I see great potential in them. We have a team for Rio because now is a generational change in the team. They need experience but the quality, commitment, behavior, and approach of young players are in place”.

What are the chances of Serbia to defend the gold medal in the European Championship in September?

“Frankly, we do not have much chance to defend the gold. We had the luck to get an easier pool, but we are currently far from the level from the last year’s tournament, maybe on a little better level than on the Olympics. We should use the World League to compose ourselves and to be ready to go on Eurovolley where the semifinals would be a great success for us”.

Will the Olympics in Rio de Janeiro be the highlight of your career and highlight of this generation in general, and could Serbia reach the podium there?

“I think we have the team for Rio and that within two or three years we will be ready to show our best to beat the most experienced teams. Now, we can not deal with them. Even to beat Iran or Germany we have to play at our best. It’s a reality. In Rio, it does not have to be the gold medal. The dream is just any medal. It would be something that would mark my career”.

What do you think of Dragan Stanković as a captain, do you obey his “orders”?

“Stanković is a great captain. In general, the two of us work great because we play together in the club as well. There, I am a captain to him while here, he is to me. He is doing his best as a captain, not only on the court but also off the court”.

How much more will you stay in Lube and what are your plans?

“I will certainly stay another year in Macerata. The financial crisis is huge in volleyball in general, in Italy as well, but I will stay for the entire contract, which means one plus one year. I had a desire to go to Brazil, I had an offer, but they are currently not ready yet for the highest level of volleyball in the organizational sense. Italy is still the best in that segment, but I think in a year or two it will be like that in Brazil, too, so I might try it then”.

To read more articles like this, click on Interviews. Tomorrow read a story that we made for you with German national team captain Jochen Schöps.

DOL sets the tone for another season of world-class Volleyball

INTERVIEW: Matias Sanchez for WoV – “We...