China stormed past Chile 25-17, 25-20, 25-17 in moving towards the quarterfinals of the FIVB Boys’ U19 World Championship in Tijuana on Wednesday. The best scorer for China was Tang Chuanhang with 17 points, followed by Zhang Zhejia with 13.Chile’s Dusan Bonacic scored 16 points. 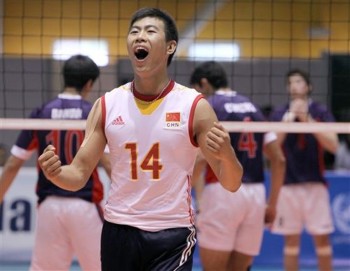 Xia Runtao’s joy during the game against Chile

The overall skills of the Chinese team – serve, block and attack – proved to be too much for the South American side that will play now for the 9-16 qualification round in Mexicali.

China held a 10-6 advantage in blocking and out-served the Chileans 6-1.

In the category of spikes, the winners were overwhelmed the opposition 47-31.

The best scorer for China was Tang Chuanhang with 17 points, followed by Zhang Zhejia with 13.

Chile’s star player Dusan Bonacic, one of the top offensive players of the tournament, was stopped to merely 16 points.

China next play against the Brazil.

To read more about this competition, click on Youth World Championship 2013 M.