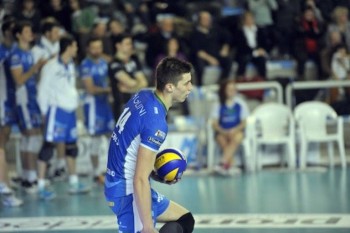 The young Slovenian spiker (1992, 2.02 m) was one of the revelations of last season’s Serie A1 while playing in San Giustino.

Born February 21, 1992 in Slovenj Gradec, Čebulj began his career in his homeland with the Fužinar in the 2007/2008 season, then went on for three years in Fram.

In 2011/2012 he was transferred to ACH Volley Ljubljana, with whom he won the national championship and Slovenian Cup before landing to Italy, in Altotevere San Giustino.

Čebulj is a member of the Slovenian national team and while wearing the jersey of his country he won the bronze medal in 2011 European League.

“Čebulj is a young player but has already expressed the great part of his resources. He has exceptional potential in both attack and the block. In my opinion, within a few years he will become outstanding player,“ said CMC’s coach Marco Bonitta about the last arrival into the club.