Iran defeated Cuba in five sets in Week 6 of the 2013 FIVB World League in Havana on Friday. Cuban Rolando Cepeda was the top scorer with 24 points, followed by teammate Yordan Bisset with 22. Amir Ghafour made 17 points for the winning team. Iran out-scored Cuba in blocking 14-8. 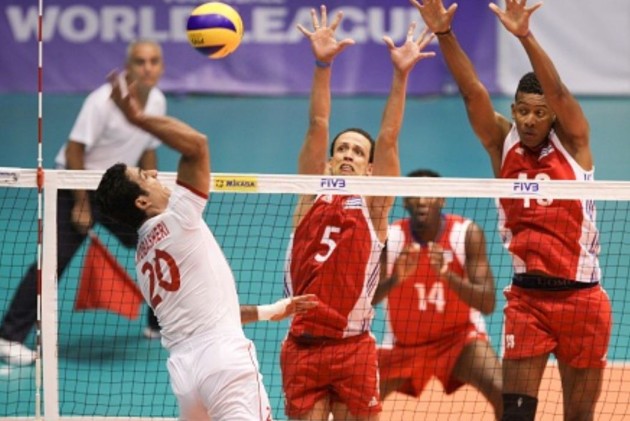 Cuba opened the game with a strong spike from lefty Rolando Cepeda. The home team were eager to capitalise on their recent win over Olympic champions Russia, but Iran replied with five points in a row, including an ace and a double-block. The visitors’ serve wasn’t that strong but their placement was good. Supported by dozens of Iranian diplomats, the team, coached by Argentinean Julio Velasco, were 8-6 up at the first technical time-out (8-6). Iran kept the lead, but sometimes their players seemed overwhelmed by the roar of the thousands of Cuban fans at the Ciudad Deportiva Coliseum. Cuba took a one-point lead at the second TTO as both teams traded points and made errors. Iran got to set point but once again lost it with a bad serve. Cepeda scored the first and last point of the set, and the crowd celebrated the 26-24 victory.

As Iran coach Velasco warned, his players now know how to play from behind. They focused on Cuba’s weak spots, like the poor receiving of Isbel Mesa, and moved into an 8-7 lead. After that, Cuba tightened their defence and ran away with the game, leading by four at the second TTO. Iran threatened with back-to-back points but Cuba regrouped and won the second set 25-19.

Never giving up, Iran came out strong in the third set. The Asian champions were ahead by four points at the first TTO and three at the second. But they succumbed to the pressure and lost the lead. Cuba tied the set at 18-18 and went ahead. But then Iran scored seven points in a row to win the set.

The fourth set was more of the same. Some unforced errors to forget, and some spikes to remember, but it wasn’t Cuban Abraham Alonso’s night; his spikes were easily chased and blocked, and Bisset couldn’t break through the Persian wall either. Captain Lian Sem Estrada replaced setter Leandro Macías, who wasn’t as effective as the previous weekend. Iran were five points up at the second TTO and a Bisset serve into the net made the match score 2-2.

Cuba took the lead in the fifth set, trying to play it safe, but Iran turned the score upside down. The best blockers of the tournament chased Cuba’s attacks and went ahead 6-4. Cuba kept tying the score. Ghafour was finally stopped by the Cuban blockade, but the home team’s serves kept going out of bounds. Cuba missed some chances to go ahead and Iran’s defence paid off as they closed the match out with a 16-14 final set.