After suffering on Thursday their second defeat since the start of the prelims, the players of Belgium’s national team got back on track claiming their ninth victory in Pool B as on Friday they downed hosts Israel in straight sets at Metrowest sports hall in Ra’anana. Gert Vande Broek and Arie Selinger commented. 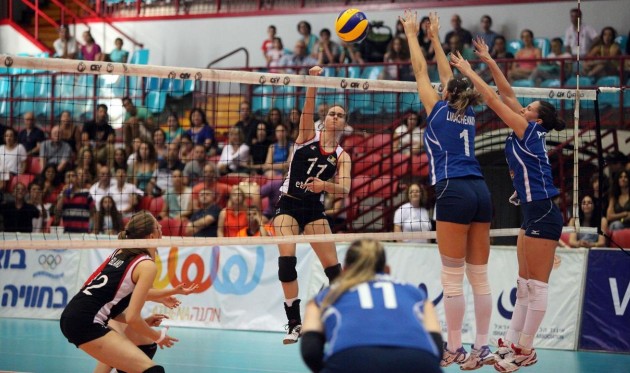 Supported by their Ambassador to Israel, His Excellency Mr. Johan Cornet, Belgium wanted to redeem their defeat to Germany from the day before and they started out strong going up 4:3 and 19:14 later in the set. Helped by Anita Gluck, the Israelis fought back and leveled the score at 21 before Belgium sealed the final 23-21 with a spike killed by Els Vandesteene (pictured).

Israel got off to a flying start in the second set (2:1, 5:3) and even enjoyed a margin of two by the technical time-out. Belgium nevertheless could promptly flip the charts around (13:12) and even though Israel team captain Moran Zur played superbly for the home side, the guests could pocket the 21-16 that meant a provisional 2:0 lead in sets.

“We played a good game also tactically” Gert Vande Broek said after the match. “We can see the development of the group since we started working with these players back in 2008.”

“Once again we could see that our young players do lack experience at this level” commented laconically Israel’s mentor Arie Selinger.

Live from Sofia: “This victory belongs to...

SLO M: Champion will be decided in...