Varna is playing host to the Final Four tournament of the 2013 CEV Volleyball European League - Women in a fiery combination with an FIVB World League double header between Bulgaria and Poland. The home crowd at the completely sold-out Palace of Culture and Sports will get a rare chance to support both the women’s and the men’s national teams of Bulgaria in action. 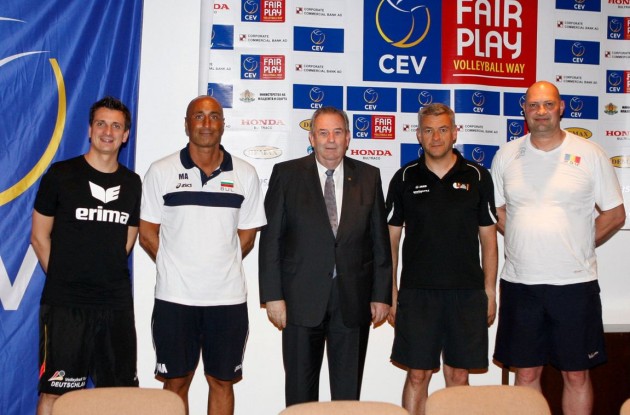 With the completion of the General Technical Meeting for the European League on Friday evening, everything seems ready for this celebration of volleyball to begin. CEV President André Meyer, CEV Supervisor Pierre Mulheims and BFV Vice President Ivan Todorov welcomed the participants in the Final Four of this fifth edition of the competition. Belgium vs. Romania and Bulgaria vs. Germany have been set up as the two semi finals on Saturday afternoon. At stake at each of these two clashes is not only a place in Sunday’s final, but also a ticket to the 2014 FIVB World Grand Prix.

Bulgaria is hosting the European League Final Four for the first time, but compared to the three first-time semifinalists, it is by far the team with the most experience in the competition. With two silver and two bronze medals behind and the local fans on their side, the Lionesses may seem set to go for the gold this time around. ”We play at home and we are aiming at winning the European League”, their Italian head coach Marcello Abbondanza says. ”Unlike last year, this time around we have a pretty good idea of what our team’s capabilities are.”

However, Bulgaria faces the tough challenge of meeting Germany in the semi finals.  The team of Giovanni Guidetti is a newcomer to the European League, but comes with the background of a silver medalist from the last European Championship in 2011. ”Saturday’s semi final will be a very tough match”, Guidetti admits. ”Bulgaria has a really strong attack and the team for sure will play very well at home and the spectators in Varna are a really strong support. But we are always ready to play. This league has been a very good experience for us, because I gave a chance to many young players to take part in official matches.”

The team of Belgium is also a debutee at the European League, but its strong performance in the League Round as it topped Pool B leaves no room for underestimation as it joins the Final Four in Varna. ”It is a wonderful experience to qualify for this stage of the competition at our first participation,” head coach Gert Vande Broek says. ”Our semi final opponent Romania defeated us in our last two meetings during 2011 European Championship and 2012 Olympic qualifications and we know it is a very tough team, but we are looking forward to playing against them.”

Romania is a regular participant in the European League, but never made it to the Final Round before. This time it finished runner-up in Pool A, second only to the Bulgarian team, and made it to the semis in Varna. ”There is a good ambiance here, in Varna,” Romanian mentor Marian Constantin comments. ”I know that volleyball is very popular here, in Bulgaria. I am sure that my team and I will fight to qualify for the World Grand Prix. I know it will be difficult, because Belgium is a very good team. But volleyball is volleyball and maybe we will make it to the final.”