Jaqueline De Carvalho and Murilo Endres will become a parents this December. 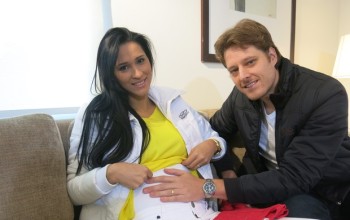 While she was sitting next to her husband Murilo, although the gender of the baby is not yet known, she said:

“It will be a big boy and will be a setter, and will pass to mum and dad – said Jaqueline with huge smile.

In 2011, Jaquelin and Murilo have faced with one of the worst traumas. Earlier that year, the player has left the volleyball court because of pregnancy, but she finds out that the pregnancy was terminated.

Later, she has resumed her career, and with Brazil she has won Olympic gold medal at London 2012.

At the end of the this season, the Brazilian couple have decided to try one more time. And they succeeded.

Check out WoV Community profiles of Jaquelin and Murilo.