Serbia, Poland, Brazil and Turkey and Slovenia continued their perfect records gaining second win at 2013 Girls U18 World championship during a thrilling day full of surprising results at Chatchai and Lipatapanlop Halls in Nakhon Rachasima on Saturday. 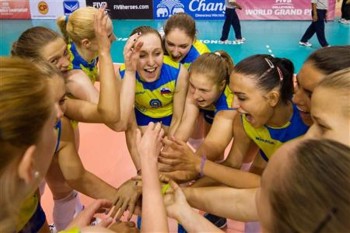 Within the teams having the perfect win- loss ratio 2-0, Serbia have became the only team in the tournament who didn’t drop a set to lead pool A. Poland leads pool B but with 5 points as they had a tiebreak win yesterday. Brazil and Slovenia conduct pool C and Turkey Pool D.

Among the four preliminary pools, the situation has become mixed and complicated in Pool B, where opening day giants, Japan lost against underdogs Argentina in straight sets, while the other titans and World Ranking leaders, China suffered their second defeat against emerging Poland.

Pool D showed also a ground breaking second defeat for the Italian team against Peru after leading by two sets, but defending champions Turkey continued their way with a second win against Chinese Taipei.

While the host Thailand was in rest, Pool A passed normally with the regular favourites Serbia securing second straight victory against Egypt and Puerto Rico gaining first win over Tunisia.

Again Pool C was the only pool having two leaders with 6 points each after both Brazil and Slovenia securing the second win against Algeria and USA respectively.

To read more articles from this competition click on Youth World Championship 2013.