A Quick performance by World No. 9 Japan brought them a wide win 3-0 (25-11, 25-7, 25-15) over Egypt to become the first team to qualify to the quarterfinal of the FIVB Girls' U18 World Championship in a 59 minutes match held at Chatchi Hall in Nakhon Ratchasima, Thailand on Thursday. 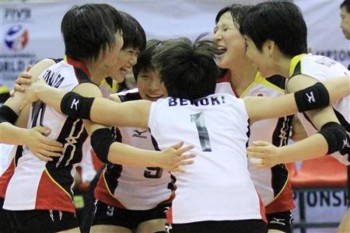 Japan qualified to play for the top 8 positions, while Egypt now plays for 9 to 16 positions.

After a good start from the Egyptian players who ended the first technical timeout to their side 8-7, but afterwards, the Japanese team put the match momentum to their side using the quick attacks that disturbed the Egyptian till the end of the match.

From the Egyptian side middle blocker Aya Ahmed scored only 5 points as her team best scorer.

To read more news from this competition click on Youth World Championship 2013.