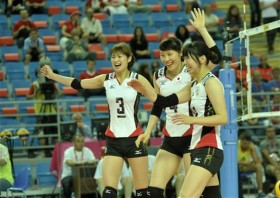 In the second set, Japan went onto the court much more concentrated and took an advantage very quickly (8-1). Even if Oleksan Gutor‘s team was so close, Japanese with strong spikes survived a while, when their opponents were able to catch up the score. With good game of each player, Japan had 16-11 score and it was impossible for Kazakhstan to overtake rivals.

Consistent game of Japan allowed them to be very calm on first TTO with advantage 8-5 in the third set. Eventually, Japan demolished Kazakhstan – 25-18.

In fourth set, Yukiko Ebata continued her good game, with 20 points on her account after last part of the game. Her team was perfect in block and attack, but Kazakh team started to play well in reception with good spikes of Anarbayeva and Mudritskaya. Kazakhstan lost with a grace, fighting for each ball, played admirably in defence, survived two match balls 24-19 and 24-20, but eventually lost 20-25.

Best scorers in Japan were Ebata with 28 and Risa Shinnabe with 20 points. In Kazakhstan, Mudritskaya noted 20 and Sana Jarlagassova 12 points.

See more photos from this match in the gallery below.