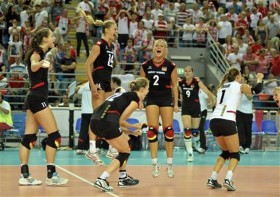 Coach Piotr Makowski had changed only one player in starting line-up comparing to Friday’s match – Agnieszka Kakolewska replaced by Monika Martalek on the net.

The clash in the first set started as close one, point for point. Smart game of Giovanni Guidetti‘s team, when Margareta Kozuch spiked with accuracy and also Furst scored a point made 12-9 difference. Poland started to play better but was powerless. Guidetti‘s team was better in each element – 25-17.

Outstanding start of Germany in the second set  (5-0) scared a bit Poland‘s team which scored only three point till first TTO (8-3). When it was 13-5, Makowski asked for time out and again changed Wolosz for Radecka and Konieczna for Kaczor. In fact, again it did not change anything in “white-red” team (16-6). Germany played better with each ball. Furst and Corina Ssuschke-Voigt were in contrast to Polish faint block – 25-17.

“White-red” team tried to stay close to the opponent, but they failed so many actions, helping Germany to maintain good result in the third set. (15-12). Makowski‘s team keep the block on good level and it was 22-22 and then 23-23. Two weak spikes of Polish captain Skowronska-Dolata opened Germany road to the victory – after ace they won 26-24.

In Germany, Kozuch and Brinker scored 14 points both, while Skowronska-Dolata scored 15 and Efimienko 9 in Poland.

To see more photos from this match see the gallery below.

See the profiles of Germany and Poland.