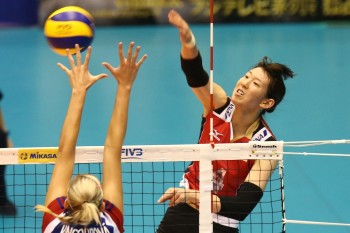 Yukiko Ebata of Japan spikes against the Czech Republic

Japan raised their record in the World Grand Prix to 7-2 while the Czechs dropped to 2-7. The Czech Republic’s loss to Bulgaria on Saturday meant they couldn’t advance to the Finals.

Risa Shinnabe (28 points) and Yukiko Ebata (25) were the leading scorers for Japan, while Aneta Havlickova led the Czechs with 29.

The Czechs had 16 blocking points to Japan’s nine, while the Japanese led on service points, 8-6. Japan committed 28 errors to the Czech Republic’s 26.

Simon – “My goal is to get out and win everything”