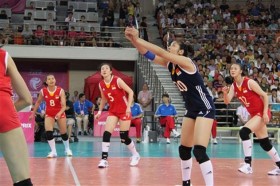 It was China‘s first victory against Serbia in the World Grand Prix, confirmed their best ever start to the competition with nine consecutive victories and gave them first place in the qualification round.

A 3-2 defeat means Serbia qualify for the tournament finals in Sapporo in third place with 23 points, behind China and Brazil.

Zhu Ting‘s strong blocks started the second set for China and they led 8-5 at the first technical time-out, 16-14 at the second one.

Errors on China‘s spikes tied the match at 16-16 and Serbia strengthened their blocks and spikes to win the second set 27-25 and level the match at 1-1.

The third set was close, although when Serbia moved into a 10-7 lead, China called a time-out. By the second technical time-out China had moved into a 16-15 lead, and with Zhu Ting prominent again, China moved away to take the third set 25-20.

Serbia responded to grab the fourth set 25-23 and force the match into a tie-break.

China absolutely dominated the tie-break, and eventually took the deciding set 15-5 to close out a 3-2 win.

PER W: Yankee Invasion in Peru