Brazil confirmed their place in the finals of the 2013 World Grand Prix with another straight-sets 3-0 (25-17, 25-16, 25-10) win against Kazakhstan on Sunday. Brazil's middle blocker Thaisa Menezes produced a remarkable performance in both offence and defence to lead her team with 17 points, eight on attack and nine in blocks, which equalled the top performance of the whole preliminary round. 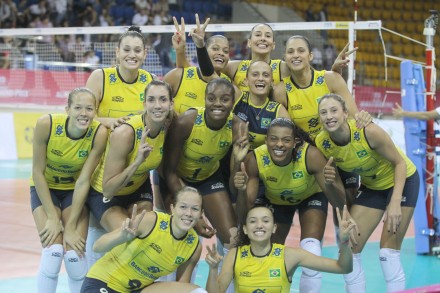 Home side Kazakhstan raced in a 4-0 lead at the start with Alena Omelchenko setting up a strong game in the middle while Irina Shenberger likewise provided wing power for Kazakhstan, but they later committed attacking errors for Brazil to take the 8-7 gain at the first technical time-out. The Brazilians tightened their defence at the net, with Thaisa Menezes and Danielle Lins posting collective blocking efforts. A reception error on the home-side enabled Monique Marinho Pavao to send down an attack for Brazil’s 16-10 lead. Omelchenko continued to spark the Kazakh offence, as her team-mates steosepped up on reception. However, Fernanda Rodrigues and Gabriela Braga Guimaraes attacked ferociously to give Brazil the clear advantage. Sheilla Castro closed out the first set with a backrow attack which awarded Brazil the first set with 25-17.

Rodrigues continued to initiate Brazil’s scoring in the second set, with her attacks from the wings as well as the back line, while Kazakhstan started to lag in floor defence. Brazil’s 8-4 lead in the first technical time-out ballooned due to their persistence in blocking. Castro likewise showed her vintage form, fiercely attacking from various angles. Sana Jarlagassova entertained the home crowd with her attacks and setter Korinna Ishimtseva later staged a successful solo block, which narrowed Brazil’s lead to 14-13. The Kazakhs managed to score 3 points after, due to the solid attacks set out by the Brazilians. The second set ended with 25-16 in Brazil’s favour.

In the third set, Brazil’s blocking with prevailed anew with Menezes at the helm, to bring them to a commanding 8-0 lead.  The Kazakh hitters tried to vary their angles to mend the damage but their efforts misfired. The host country failed to improve their level of play and mostly allowed Brazil to pull away towards a 25-10 advantage in the final set.