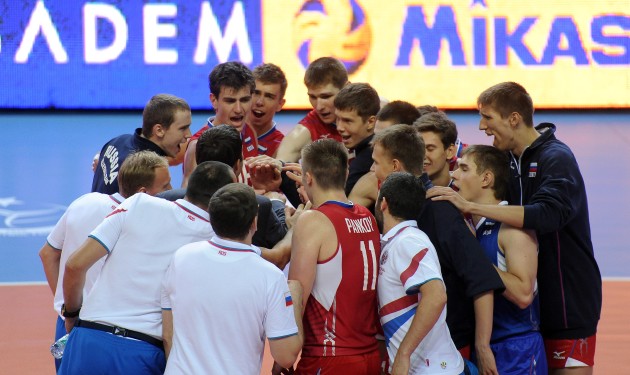 Russia’s opposite spiker Victor Poletaev led the match scorers with impressive 28 points which the competition’s best scoring performance so far, while Brazil’s opposite Alan Souza contributed 21 for his side.

Russian blockers played the crucial role in the victory specially in the first and third set having a dominance of 15 stuff blocks throughout the match. Russia also scored 12 aces making over the best serving performance against 7 for the Brazilian side.

Russia started the match in a better disciplined line up as they deployed their impermeable block against Brazil attacks through the middle blockers Ivan Demakov and Ilyas Kurkaev to stop their weapons and succeeded to win the set easily 25-17.

Brazil regained their performance late in the second set after Russia had the lead frequently through their setter Thiago Veloso who conducted the combinations that surprised the Russians. Brazil’s middle blacker Leandro Santos had a role in the quick attacks from position 3 beside the attacking power of the opposite Alan  Souza as they succeeded to win the second set 25-23 to tie the score 1-1.

Again Russia’s big gun Victor Poletaev started to explore the ways to Brazil’s court through his sharp spikes from position 2 and allowed Russia to regain the lead 2-1 after they won the set 25-20.

Brazil widely led 8-2 at the beginning of the using some disturbance in the Russian backline defence. However Russia returned back to decrease the point deficit before the motivated Brazil stars won the set 25-21 to extend the match to the first tiebreaker in Izmir.

Brazil again had the early lead in the tiebreak using the great spirit they gained till they reaches 8-6 at the court turn. Russia returned back through their well known service where they won three successive points after Brazil’s reception mistakes to win the hard fought 16-14.

WL 2016: Azzurri too strong for Australia