Turkey succeeded in pulling off a second straight-set victory at the FIVB Volleyball Men's U21 World Championship to the delight of the home fans in Ankara. In the last match on Friday’s schedule at Baskent Volleyball Hall, the local heroes shut out a whole-hearted Moroccan side by 3-0 (26-24, 25-21, 25-22). 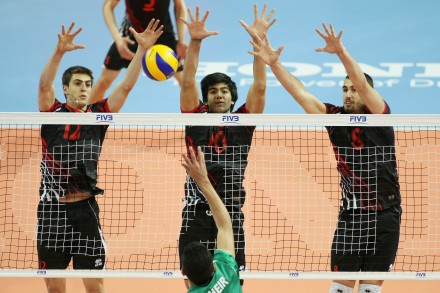 The home guys were in for a big surprise in the first set as the Moroccans rushed off to a solid lead with captain Zouhair El Graoui contributing both in offence and blocking. However, led by own captain Baturalp Burak Gungor, the Turks strengthened their block to come from behind and even get to two consecutive set points at 24-22. They could not take advantage of them as Morocco equalised the score again. However the following two rallies went Turkey’s way and the crowd on the stands happily cheered the final 26-24 in this set.

Morocco tried hard to put up a fight in the second set, but managed to stay competitive only through the first technical time-out. After that Turkey managed to break away and close the set at 25-21. The home side had the initiative throughout the third set, but it was a tightly contested affair. Morocco fought on to stay close behind, but their good blocking efforts were not enough to stop the incessant Turkish attacks. A beautiful and very powerful spike by Gokhan Gokgoz put an end to this interesting match at 25-22.

With 14 points made up of 1 ace, 3 blocks and 10 hits, Turkey’s captain Baturalp Burak Gungor became the best scorer of the match. Zouhair El Graoui produced 13 points for the team of Morocco.