GP F6: Karch Kiraly – “We learned a lot this week” 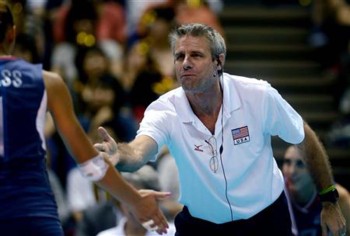 “This has been a challenging week. We lost four straight matches. We knew we would face a very strong Japan team and I’m very happy for the way my team fought. They fought very hard and every player on my team made a contribution, all 14. It’s good to end on a positive note after a difficult week. I think it was great for our program and young players; there were a lot of people who hadn’t had any significant time in the World Grand Prix – people like Cassidy Lichtman, Lauren Paolini, Lauren Gibbemeyer, Kayla Banwarth, Kimberly Hill, Kelly Murphy. It was really good for them to get experience. The positive was the nice Preliminary Round we played; the difficult part was seeing how good we have to be to compete in the world. We learned a lot this week; they were not easy lessons, but we learned a lot.“

“First, congratulations to Japan; they played a great game. It’s always a battle when we play Japan, as it was tonight. I’m happy for my team and proud of everybody. It’s been a challenging week for USA and I’m really proud of the way we fought, especially in the fifth set.“

“It was the final day and we really wanted to win, but the team made mistakes at important points and it’s natural that if they blow chances then they can’t win. But this tournament, with these young members playing against the top teams in the world, will be valuable for the team. However, I’m not satisfied because we only won one match.”

“I really wanted to win today’s match. The team couldn’t make it in the end and that’s a shame. In the matches that went to five sets it seems that this team can’t win, so we have to address that.”

To read more about this competitionclick on World Grand Prix 2013.