Italy triumphed with the bronze medals from the FIVB Volleyball Men's U21 World Championship in Turkey. The European champions won the third place classification match against France after a dramatic ending that shaped up the final 3-1 (25-21, 25-16, 20-25, 28-26). 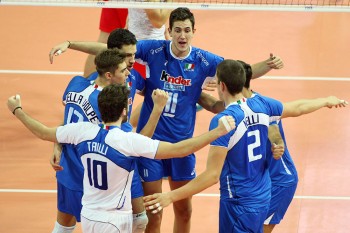 Italy managed to come from behind in the first set and win it by 25-21.

They completely dominated in the second set and doubled their advantage after a convincing 25-16.  However, the Italians lost some of their concentration in the third set, but still attacked successfully. France showed some great blocking to take the edge.

They were the better team in the conclusive moments of the set to win it by 25-20.

In set four France were cruising towards a tie-breaker as they had a six-point advantage at 21-15.  However, they could not hold on to it and their opponents managed to catch up and level the score.  France were ahead again at 24-23, but could not capitalise on three set points before an ace by Edoardo Picco and a successful block by Enrico Diamantini gave Italy the two break points they needed to win the set by 28-26 and the match by 3-1.

Italy’s Luca Borgogno and France’s Julien Winkelmuller emerged as the best scorers of the match with 15 points each.  Substitute Gabrielle Nelli contributed another 14 points to his team’s victory.

See the WoV Community profiles of Italy and France.

GP F6: Karch Kiraly – “We learned a lot this week”