Dominican Republic defeated Puerto Rico 3-1 (25-18, 26-24, 19-25, 25-21) Friday evening to earn a spot in the 2013 Visit Omaha NORCECA Women’s Continental Championship gold-medal match on Saturday at 8 p.m. CT. Dominican Republic will play the winner of tonight’s second semifinal match between host United States and Canada in the gold medal. Dominican Republic has reached the title match in each of the last three editions of the biennial championship, including its only gold medal in 2009. Puerto Rico will challenge the second semifinal loser in the bronze medal match at 6 p.m. CT on Saturday. 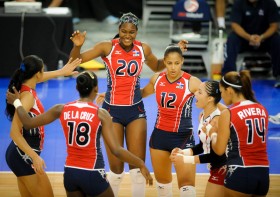 Dominican Republic won the battle at the net with a 13-7 block advantage, along with a 61-53 margin in kills. Puerto Rico scored a 5-1 advantage in aces.

Dominican Republic Coach Marcos Kwiek: “We’re very happy with making it to the final. That’s what we came here to accomplish. Although we made some errors, we will have enough time to prepare for tomorrow’s match.”

Puerto Rico Coach Jose Mieles: “We always have tough matches against Dominican Republic. It seems like we have yearly battles. Our team did what it was supposed to do, although I’m not 100 percent satisfied. We didn’t get the victory. It was still a good performance.”