Brazil got its third win easily defeating Argentina 3-0 (25-16, 25-13, 25-7) in 66 minutes, and is getting closer to achieving its 18th South American gold which will ensure direct classification Italy World Cup next year and presence in the Grand Champions Cup in October. The top scorer of Brazil was Fabiana Claudino with 13 points, with 7 goals Lucia Fresco was the most prominent in the Argentine cast. 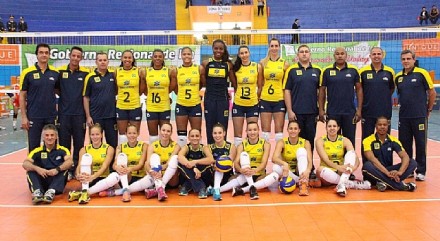 The game started evenly, with a Brazil sligthly in the lead against motivated Argentina. As the game progressed, receiving errors cost Argentinians so much, and allowed the Brazil to overtake the lead 25-16.

A monologue of Brazil started in the second set. The Argentineans disappeared leaving the show to team led by Ze Roberto and allowing them to win by a wide margin. Altough according to everything seen it was an accurate reflection of what was happening in the game.

In the third set the Brazil was like steamroller, and without hesitation with their best offensive weapon they have closed this game in a scary fashion.

Fabiana Claudinho talked about the win: “The serving and blocking worked very well in the match and were the key to victory today. We were very focused on the game.”

Emilce Sosa, captain of Argentina, chose to comment on the next opponent: “We will study Peru, because that is only what matters now. We know them very well and played them and i can asure you that is goind to be very difficult, but we we will make a good game. It would be important to repeat the silver medal we got in 2011. We hope to do it again.”