The United States earned a spot into the 2013 Visit Omaha NORCECA Women’s Continental Championship title match by defeating Canada 25-22, 25-14, 25-15 on Friday evening in the tournament’s second semifinal match at Ralston Arena. The United States, the defending champion of the biennial championship, will seek its seventh title in the tournament’s 23rd edition dating back to 1969. The Americans will play Dominican Republic, tonight’s other semifinal winner, on Saturday at 8 p.m. CT. 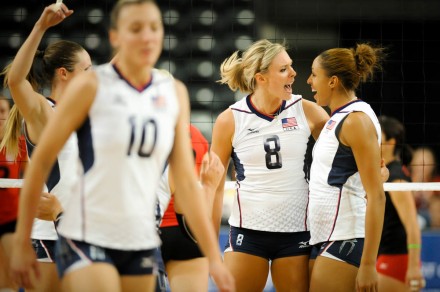 On their way to finals

The United States out-served Canada 6-0 in aces and its offense generated a 37-24 advantage in kills. The Canadians held an 8-6 edge in blocks.

U.S. Coach Karch Kiraly: “I thought Canada came out and did a really nice job of attacking us, especially from the service line. We didn’t handle it that well. That’s actually our game plan. We want to be attacking every opponent that we face. In fact, they attacked us more than we attacked them. I feel like we were waiting for them to make some errors and they didn’t. They played some nice, clean volleyball. At some point, we had to make a decision to try to be proactive and not just wait; but start forcing them into some less-comfortable situations.”

Canada Coach Arnd Ludwig: “I think there were two differences (between the first and second sets). I think the U.S. made some adjustments to our game. Also in the first set we were just going for the ball and made a lot of good serves and attacks and in the second set we were a little more scared. We didn’t put the same risk into the attack.”

SRB M: The Greeks will play for...