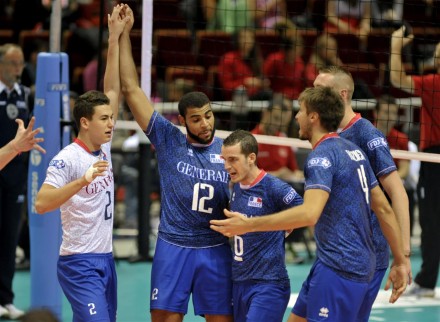 France got the win, first place in group B and the place in the quarter finals. Laurent Tillie combined after two sets and changed almost whole starting line up. Ngapeth was amazing and got 15 points in only two sets!

France’s head coach Laurent Tillie decided to use every single player on his roster but this did not prevent his side from cruising to a relatively comfortable victory. “The team needed to stay under pressure and so after reaching our goal, which was to win two sets, I decided to test some of our back-lines. It was a good chance for them to show what they are capable of even though they could not find the rhythm for quite some time” Tillie said after the game.

France set the pace of the game all the way through the opening set (8:7, 16:12) and eventually cashed it by the score of 25-21. The “Bleus” – anchored by Antonin Rouzier and Earvin Ngapeth – showed great composure also in the second set; Turkey’s head coach Emanuele Zanini asked for a break as his guys were trailing 16:20 and even though they could survive to three set balls for their opponents, France eventually finished it off at 25-23 with Ngapeth. Tillie started the third set with his second lines and this had an impact on the game with Turkey cruising to a speedy 25-18 paced by Kemal Elgaz. Turkey kept momentum also in the early phases of the second set (8:5) but France fought their way back with great spikes killed by Mory Sidibe. After a very close final rush, a block by Kevin Tillie sealed the final 25-23 and 3:1 for France.

Turkey’s Kemal Elgaz top scored in the game with 16 points while Ngapeth and Sidibe registered 15 and 13 for France respectively.

With this defeat Turkey is out of the competition as a last placed team.