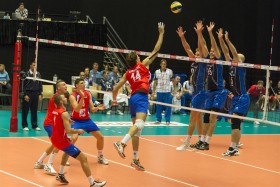 Serbs finaly played a good game after two slip ups, but that was not enough for the first place in group. Nikola Kovacevic played a fantastic game with an ”out of this World” performance in attack 14 out of 15! Serbs will play Denmark in playoffs, while Finland will qualify directly to quarterfinals.

Serbia needed 3 points to go through to the Playoffs and Finland had already won the group and a place in the quarterfinals. It was therefore not a big surprise that Serbia won 3-0 (25-20, 25-23, and 25-15) but the 2011 European champions did play a great game and will now meet hosts Denmark in the Playoffs in Aarhus, Denmark on Tuesday night. This means the Netherlands takes third place in the group and Slovenia is out of the competition.
It was a tight match at the beginning of the first set as both teams wanted to play ball. Finnish captain Antti Siltala again showed the way for his team with a massive spike through six Serbian arms and a 14-13 lead. Serbia would quickly respond though and started playing with more confidence and more pressure on the balls. Serbia put in the effort of a winner and moved away from Finland – also getting a hold of Siltala. Serbia rounded off the first set with a comprehensive 25-20 win.
Set 2 and Serbia was again in the lead. Quicker and more aggressive than Finland that could manage a defeat. Serbia fought for every ball and was up 6-3, 7-6 and 10-8. The second set turned into a power struggle. Which proved strongest: the insisting spiking from Serbia with Aleksandar Atanasijevic in the lead or Finland’s smooth blocking game with Siltala and Konstantin Shumov showing the necessary muscles?  It would stay close in this second set, but it was obvious that Serbia needed this more and thus wanted it more. Middle-blocker Srecko Lisinac at 205 cm flew high and dominated the net and threw down some good spikes, hammering down two quick nails in the Finnish floor. The score said 22-22 before Serbia finally slipped away and got the 2-0 lead with a 25-23 set win.
Finland had nothing to play for and their blocking was not so strong anymore, which cost lots of points on their blocks going out of bounds. Serbia went for 7-8 to 11-8 and to a 17-10 lead. They closed down the match 25-15 and 3-0 in sets securing second place in the group to meet with Denmark in Tuesday’s playoff match in Aarhus.

Also check out photos at Galleries and read our coverage page at European Championship 2013 M.