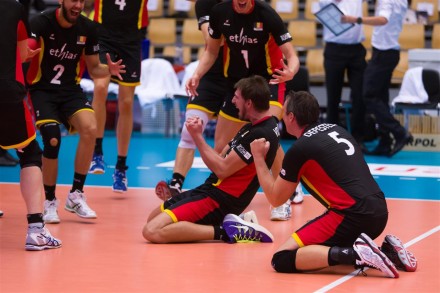 The second match of the day in pool A was the pool final between Italy and Belgium – both with two wins after two rounds of action. Italy looked the stronger side in the beginning of the first set, where they had an 8-6 and 16-10 lead. But the momentum of the set switched and Belgium took the first set with 25-23 after a superb comeback.
Both teams displayed a very high level of Volleyball and fought to qualify directly to the 1/4 finals and secure an extra day of rest. The Red Dragons from Belgium had the lead 8-6 and 16-14, and opposite Bram van den Dries kept hammering holes in the floor with his right hand. Italy’s head coach Mauro Berruto called a time-out as his side was trailing 18-21, but Belgium kept cool and won the set 25-19.
Things turned around in the third set. The Azzurri got their game together, and with Ivan Zaytsev upping his figures, Italy doubled their 8-6 lead at the first technical time-out to 16-12 at the second. Belgium seemed to have given up the set, and the Italian team closed it safe by 25-18. Waterproof blocking from Thomas Beretta and company gave Italy the 8-6 lead at the first technical time-out of the fourth set. The world class Volleyball continued with opposite Luca Vettori scoring 9 important points for his team securing the 16-15 lead. From somewhere Belgium got back momentum and took a 22-20 lead. But Italy showed why they are considered one of the Championship favourites surviving to three match balls for their opponents and brought it home at 27-25.
The fans in Arena Fyn got value for their money as the second tie-break of the day was a reality. Here team captain Frank Depestele brought out the best in his team and Belgium won the fifth set 15-9. With the result Belgium finished first in pool A and Italy will have to face the Netherlands in the Playoffs on Tuesday.