After an unexpected loss against Germany, Russia got their act together and dominated next two matches. After win over Czech Republic yesterday, Bulgaria was on the table and Russia delivered a win 3-1 (25-18, 23-25, 25-14, 25-19). 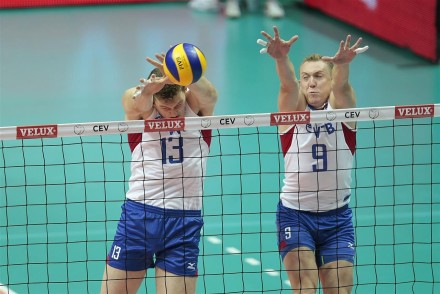 This time, Voronkov didn’t experimented, didn’t change and he didn’t need to. Russian line-up worked great. Muserskiy with 21 points showed why he is one of the strongest weapon this Russian team has. Pavlov was also at a high level with 20.

Russia beat Bulgaria 3-1 (25-19, 23-25, 25-14, and 25-19) in the last match of Pool D to finish second in the group as both teams made the Playoffs of the EuroVolley 2013. Dmitry Muserskiy topped all scorers with 21 points, followed by his teammate Nikolay Pavlov and Bulgaria’s Tsvetan Sokolov with 20 apiece.
The starting line-up of Bulgaria differed from the one people got to see on Friday and Saturday – Todor Skrimov and Nikolay Nikolov were replaced by Valentin Bratoev and Teodor Todorov. The Russians started the game with their strongest players and it paid off – they quickly gained a 9-5 lead, in spite of Bulgaria’s spectacular blocks. The Russians dominated throughout the set, increasing the advantage to even eight points (21-13) and took it 25-19.
Bulgaria showed some impressive skills in defense, but Russia was unstoppable. The Bulgarians started the second set highly concentrated and took the lead at 3-0. The Russians tied the score at 6-6 and then gained advantage with three of Dmitry Muserskiy rocket-like serves. The play continued on a point-by-point basis afterwards, as both teams struggled to get ahead. Eventually Bulgaria did (20-17) and Russia’s head coach Andrey Voronkov called a time-out, after which his team took the next three points, levelling the score once again. After a thrilling finish the Bulgarians came out on top (25-23) and set the overall score at 1-1.
Set 3 belonged to the Russians, who left the opponent five points behind right in the beginning. Bulgaria tried to catch up, but the rivals were out of reach. They kept a safe distance and did what they do best – spiked strong, served even stronger and picked up the set 25-14, taking the lead in the match 2-1. In the fourth set both teams were very concentrated – Bulgaria needed to win to stay in the game, while Russia wanted to finish the match as quickly as possible – so the score was close from the start. It was not until the second mandatory stop when the Russians finally got a bigger – four-point – advantage. The Bulgarians fought hard to regain control, but were unable to do so. Russia took the set 25-19 and the whole match 3-1.