Poland had to win over Slovakia not because of the placemant but for these amazing fans. Almost eleven thousand came again to cheer for their national team and to give then strength to overcame all the obstacles. Slovakia didn't pose a treath and final result was 3-1 (26-24, 20-25, 25-19, 25-20) in favor of Poland. 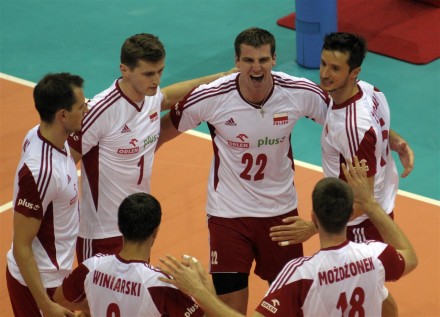 Match’s top scorer was Bartosz Kurek, who scored 17 points with 54% percent of succesful attack and he had huge help in Mozdzonek who had 16. For Slovakian side, Milan Bencz was the best with 15.

Looking totally different than the night before as they had lost to France, and even though they missed many of their serves, Poland beat Slovakia 3:1 (26-24, 20-25, 25-19, and 25-22) to finish second in Pool B and play Bulgaria in the Playoffs coming up on Tuesday.
Slovakia’s head coach Stefan Chrtiansky decided to start the game with the second lines that had contributed to their victory on Saturday over Turkey, including Milan Bencz and Juraj Zatko. On the other side of the net, with the only exception being libero Pawel Zatorski, every single Polish player was towering above 200 cm. Not surprisingly Poland displayed a great performance in blocking especially with their captain Marcin Mozdzonek. Poland went up 21:17 and even though Slovakia drew level at 24, Bartosz Kurek sealed the final 26-24.
In the second set head coach Andrea Anastasi decided to change Michal Winiarski with another Michal, Kubiak. Even starting setter Lukasz Zygadlo was replaced by Fabian Drzyzga and after trailing 7:10, Poland reduced the gap to a minimum at 16:17. Slovakia still moved the score up to 20:17 and Frantisek Ogurcak finished it off for the guests at 25-20 for the 1:1 in sets.
Poland stormed out to a 9:7 and 13:8 lead in the third set, and eventually was able to keep that cushion (19:15) closing the set at 25-19. The hosts started the fourth set with a great run (6:1) and even though Slovakia fought their way back, Poland finished it at 25-22 for a well-deserved win.
Bartosz Kurek and Marcin Mozdzonek top scored in the end with 17 and 16 points while Bencz registered 15 for Slovakia, well supported by Matej Patak and Stefan Chrtiansky jr. with 12 apiece.

Arena in Gdansk was packed and atmosphere was incredible. Polish fans are showing daily what love towards volleyball really means, and they have given a very hard homework to any future home crowd at this kind of events.

ITA M: Playing with heart, on and off the court