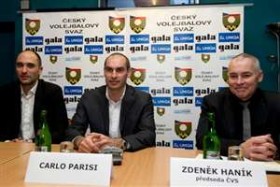 The 52-year old Parisi is already well-known in the Czech Volleyball family for being the head coach of Italy’s Yamamay BUSTO ARSIZIO, the club two of the major local stars – Helena Havelkova and Aneta Havlickova – are currently playing for.

The team is also the dominant force in Italy’s national league this year and as per local sources Parisi will be able to combine this position with his duties towards the Czech Volleyball Federation.

“I would like to thank the Czech Volleyball Federation for this opportunity as I will be working abroad and with a national team for the first time in my career” said Parisi while attending a press conference in Prague.

“We have had some friendly meetings and I am sure that this cooperation will bring the Czech national team back to the prestige and fame it enjoyed in the past”.

Parisi started his coaching career some 20 years ago in Italy’s second division with the club of Mangiatorella MESSINA.

He has been working for the likes of Yamamay since the 2004/2005 season, immediately moving it up to Italy’s Serie A1; this year his side has already claimed the national cup and is considered the main favorite to seize also the trophy of the national league.