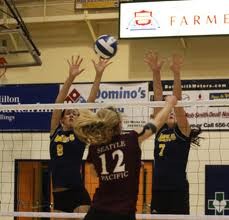 It was the expected tense game where both teams had chances to win. In 5. set Innsbruckerinnen won with 15:9.
In the second match of the evening  Askö Linz/Steg  won against TSV Sparkasse  Hartberg with 3:1 (18:25, 25:22, 25:18, 25:14). After a brief start Linzerinnen have turned the game and  won the next three sets. The coach of  Linzerinnen ,Walter Hartl said: “In the end it was a clear victory and it was satisfying. In the beginning we had expected a clear victory of 3-0 against Hartberg. However, Hartenberg had a good defense. After the problem with a toe entered Meyers, then everything got better. “

They supposed to play in China –...