WCHQ M: Despite first setback Oranjes are through to last qualification round

On the next-to-last day of the second round World Champs qualifier at Topsport Centre in Almere, the Netherlands suffered their first setback as they lost to Ukraine in straight sets (23-25, 23-25, and 21-25). However, following the results of the matches scheduled for Saturday, the “Oranjes, Ukraine, and Belarus all made sure they will finish among the top three of the tournament and will hence continue their World Championship campaign via the last stage of the qualification process coming up in early January. 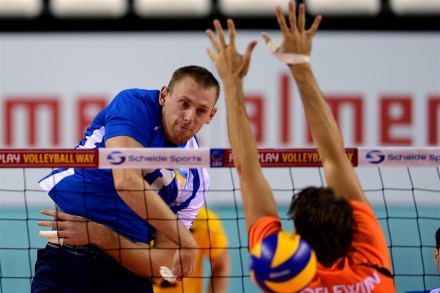 Together with the Netherlands Belarus is the sole team starring in Almere that recently participated in the 2013 CEV VELUX EuroVolley and on Saturday the guys from Minsk claimed their third win in the tournament by edging Romania 3:2 (23-25, 25-21, 25-16, 21-25, and 15-13). Belarus stormed out to a 13:11 lead in the opening set but Romania fought their way back to flip the charts around (18:16) and claim the opening set (25-23). Belarus woke up in the second set and moved to the front helped by their middle-blocker Siarhei Busel (19:15); the players mentored by head coach Victor Sidelnikov controlled the game and drew level in sets (25-21). Belarus kept that momentum also in the third set (16:10) and did not look back to wrap it up at 25-16 for the provisional 2:1. Still Romania could find their best play in the fourth set where they moved up to 17:14 and 22:19 to cash that section of the game at 25-21 and call for the tie-break. Romania stormed out to a 7:4 lead there but Belarus fired back to make it 10 all and eventually cruised past their opponents finishing it off at 15-13. Romania’s Marian Iulian Bala top scorer in the game with 22 points while Pavel Audochanka paced Belarus with 21.

Israel claimed their first victory in the tournament as they downed Sweden in straight sets (25-15, 25-14, and 26-24) on Saturday afternoon in Almere. Israel dictated the pace of the game right from the start (8:7) and gradually accelerated the pace (18:10) to make it quickly to the final 25-15. The second set followed a very similar plot with Israel opening with a terrific 12:6 thereby forcing Johan Isacsson, Sweden’s head coach, into a time-out. However, that did not change the course of the game as Israel comfortably sailed to the final 25-14. Even though the third set was very close, it was once again Israel to have the upper hand in the end (26-24) for a relatively surprising straight win. Guy Ben Gal was the most prolific player in the game with 20 points while Fredrik Gustavsson scored 10 for Sweden.

The “Oranjes” suffered their first setback in the tournament as they lost in straight sets to Ukraine on Saturday night. The hosts look tired and never really stood a chance even though all sets were very close (25-23, 25-23, and 25-21). Sergiy Tyutlin anchored Ukraine to this straight win scoring 21 points while Jelte Maan topped the charts for the Netherlands with 10. Though they lost that game in straight sets, the Netherlands are still ranked first in the group for they have a better point ratio than their rivals from the Ukraine.

On Sunday the tournament in Almere will come to a close with Belarus playing Sweden, the hosts from the Netherlands testing the likes of Romania before Ukraine and Israel go for the very last showdown of the competition.

Countdown has started in London, only four...