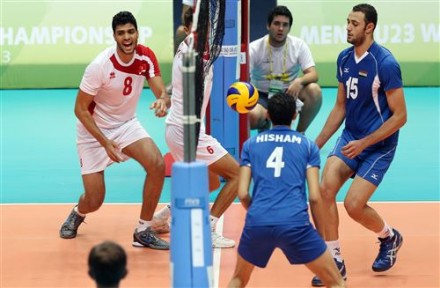 Despite some good serving from wing spiker Ahmed Elkotb, Egypt made a few too many errors in the first set and Tunisia won 21-19 with wing spiker Elyes Garfi their prominent scorer.

Tunisia controlled the second set with captain and opposite Mohamed Arbi Ben Abdallah dominating their attacks as they won the set 21-17.

In the third set, Tunisia were ahead 12-10 at the technical timeout, but more power serving by Elkotb pressured Tunisia and Egypt got ahead by a couple of points as the set drew to an end, and then closed it out 21-18 to make it 2-1.

Egypt’s blocking game, in the shape of wing spiker Omar Hassan, allowed them to get ahead in the fourth set and, combined with powerful attacking from Elkotb, level the match at 2-2 with a 21-19 set win.

Tunisia forged ahead 6-3 early in the tie-break and carried that lead for a 15-7 win in the decider. Ben Abdallah was his team’s top scorer with 26 points.

CWCH W: Iowa Ice carry on with season of firsts

Azerbaijan: Victories for Rabita , Azerrail and...