CWCH W: Iowa Ice carry on with season of firsts

From the time they captured the United States’ 2nd Annual Women’s Premier Volleyball League title, Iowa Ice bid farewell to anonymity and created a new chapter in their club history as they represent NORCECA at the FIVB Women’s Club World Championship in Zurich. 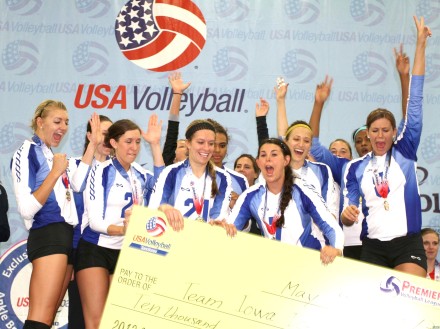 The club team’s aim of solidifying its base for its adults, junior and youth teams following a grassroots model, is a core value that they share with the league. Its primary composition of Iowa-based players projected a strong image in the volleyball community; and likewise garnered strong regional support in their conquests.

In the inaugural event in 2012, Iowa Ice  reached the finals but lost to their opponents Hoosier Exterminators. In 2013, Iowa Ice captured its first title by beating Florida Wave in Louisville, Kentucky.

The young club team’s achievements continue to flourish as their inclusion in the annual women’s club competition added frill to their saga of firsts – pioneering triumphs in the 2012 and 2013 seasons.

Their first international voyage serves as a baptism of fire when they compete against the best club teams in the world from October 9 to 13, 2013. But this may also be the perfect time for the club team to put Iowa Ice in the map of international club volleyball.

Iowa Ice is in B group with Unilever and Vakifbank. Competition starts on 9 October.

For more information about this competition click on Club World Championship 2013 W.