Brazil claimed a place in the final of the Men's U23 World Championship with a 3-0 (21-16, 22-20, 25-23) victory against Russia on the penultimate day of comeptition at a noisy Arena Presidente Tancredo Neves. 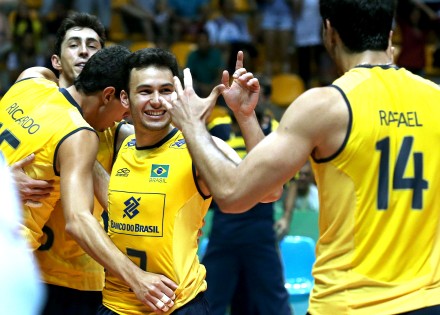 Russia quickly moved into a 5-1 lead at the start of the first set, based around the serving of captain Dmitry Kovalev, but a timeout helped break his rhythm and Brazil managed to reduce the deficit to 12-9 by the technical timeout thanks to the blocking of Matheus Cunda.

More blocking got Brazil level at 14-14 before captain Ricardo Lucarelli – restored to the team after a knee problem – scored three crucial spikes that helped Brazil take the set 21-16.

The second set was similar, with Russia scoring the first three points of the set before Brazil scored the next six, again with Cunda prominent, forcing Russia head coach Sergei Shliapnikov into a timeout at 6-3 down.

Strong serving from both teams made receptions difficult thereafter and Russia got ahead again at 20-19 with a point from wing spiker Leonid Shchadilov, but then his next serve was long and a Lucarelli block and a Rafael Araujo spike gave Brazil the set 22-20 and a 2-0 lead.

It was much closer at the start of the third set before Russia had a run of points just after the technical timeout that put them in control. Errors helped Brazil back into it, but they still had to save a set point at 21-20 down with a Lucarelli spike.

The captain followed that up with a huge serve that gave Brazil the upper hand in the sudden death and a few points later a Cunda block gave Brazil the set 25-23, a rare recent win against Russia and a place in the final.

Cunda scored seven blocking points in Brazil’s team total of 15 for the match, while many of Lucarelli’s 11 scores were at crucial moments. Shchadilov and Ivan Komarov each scored 10 points for Russia, but it was their total of 22 error points against compared to Brazil’s 15 that was a critical difference in a close match.

On the final day of the tournament Brazil will now play for the gold medal against the winner of the second semi-final between Serbia and Bulgaria, while Russia will play for bronze against the loser of that match.