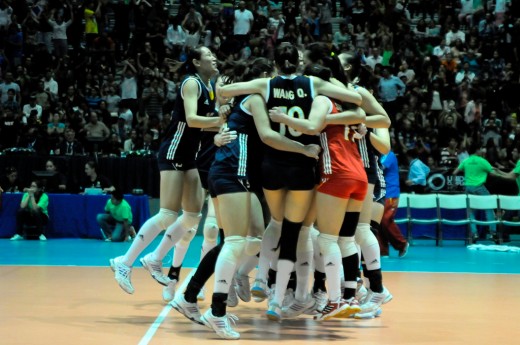 Liu Yanhan and Zhang Xiaoya each recorder 17 points to lead the Chinese team followed by Zhang Zou with 9 points and Gu Xinwei and Wang Qi with 8 apiece.

Brayelin Martinez and Jeoselyna Rodriguez finished with 14 and 13 points, respectively, for the Dominican side. Candida Arias and Yonkaira Peña each contributed 7 tallies.

China held an overwhelming advantage of 11-4 in the blocking category with Yang and Zhang leading the charts with 4 and 3, respectively.

China led 8-6 with Liu Yanhan landing three big spikes to compensate several attacking errors by the Chinese side. The Dominicans stayed close at 13-11 behind the attacks of Yonkaira Peña and Brayelin Martinez. The spike of Yanhan combined with an opponent error gave China a 16-11 advantage. The Asian team increased the gap to a comfortable 18-12 with Zhang Xiaoya contributing spike and block. The Dominicans closed in to 23-21 but Gu Xinwe scored twice for the 25-21 score.

The Dominicans closed to 14-13 behind the attack of Martinez and one ace by Camil Domnguez but Zhang answered from the other side with two big kills for a 16-13 score. China won the second set 25-20 despite some impressive spikes by the towering Martinez.

Rodriguez gave the Dominicans their first advantage at 15-14 and Peña serve one ace for 16-14. Wang Qi scored twice to even the score. The fantastic duel continued to 20-20 with both teams firing big shots.  Wang scored and Zhang blocked Rodriguez for 22-20. Yao Di blocked Rodriguez for match-point at 24-21 but the Dominicans back in game to tie at 24-all. Liu scored and Yang Zhou blocked Martinez to close at 26-24.

For more photos, see the Gallery below.