Brazil’s Sada Cruzeiro roared past Deportivo La Romana of Dominican Republic in straight sets (25-20, 25-22, 25-16) in the third and last contest of opening day of FIVB Men’s Club World Championship played in front of 5,599 spectators on Tuesday. 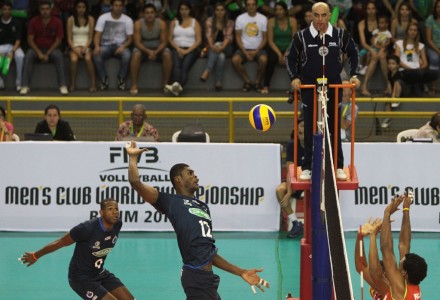 Sada Cruzeiro led in the blocking category 7-2 and also in aces 5-1. Both teams gave away a lot of points, especially with missed serves. Sada Cruzeiro made 26 unforced errors compared to 22 by the defeated club.

Wallace Souza’s contributed two points top ut Sada Cruzeiro in the lead 8-7 in the first set. A few Brazilian errors allowed La Romana to take the lead 11-10 but Luis Diaz attacked and blocked and Souza added two kills for the 14-11 difference. Eder Carbonera blocked Elvis Contreras for a comfortable 16-12 advantage and the first set concluded at 25-20.

The home side led 8-4 at the first TTO and the margin widened to 10-4 when the attack by Contreras sailed long and Yoandy Leal blocked Kelvyn Campechano. La Romana cut the gap to 15-12 after the spike by German Recio and the ace by Henry Tapia. A big hit by Souza sent Sada Cruzeiro in front by four at the second TTO. The spike by Contreras finished a long exchange and La Romana closed within two points at 19-17. The second chapter closed with a 25-22 score.

In the third set, Sada Cruzeiro again took an 8-4 advantage. The local boys expanded the gap to 15-9 with consecutive kills by Douglas Cordeiro, Souza and Filipe Ferraz. The second technical time out saw Sada Cruzeiro in front 16-11. When play resumed Cordeiro landed his spike and Ferraz continued with one ace to put the set in the bank at 18-11. Leal closed the match with one ace.

See out MAIN PAGE of the competition.

Also check out fresh photos in our Galleries.

CWCH M: It was a very difficult task for Trentino Diatec