Third round of French PRO A division is over, and after it, no team except for Paris has the perfect score. 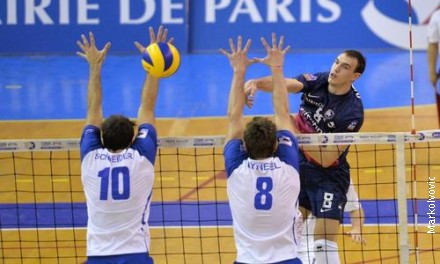 Derby match of the third round really fullfiled the expectations. Paris and Beauvais played an exciting five setter and the home team got away with a victory.

Marko Ivovic was once again the bright star for Parisian squad as he scored 23, received 51 service and still got a decent attack percentage of 50%. Bram Van Den Dries on the other hand, was the best in Beauvais with also 23 points.

Tours finally got an easy win at home against Toulouse 3-0. As well as Rennes versus Cannes with the same result.

St-Nazaire managed to snatch away the victory at Nantes after a tie-break. Sete was unable to protect their home ground as Ajaccio got the three points away from home. Chaumont easily got the victory versus Narbonne and now stand high on the second place on the standings.

Last but not the least Montpellier won over Lyon 3-1, and dropped Nikolov’s team to a 1-2 after a sensational win versus Tours in the first round.