On Wednesday VfB FRIEDRICHSHAFEN will be vying for their first victory in prelim Pool G of the 2014 CEV DenizBank Volleyball Champions League – Men as they host Turkey’s rookie Galatasaray ISTANBUL. VfB and Galatasaray have lost their respective matches in the first and second round of the competition and therefore if they want to keep alive their chances to make the Playoffs 12, they both need to seize the night at the ZF Arena on Wednesday. 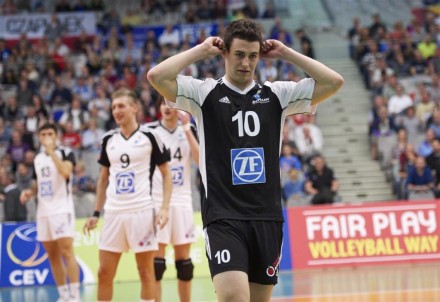 VfB just claimed a match of the Bundesliga with RWE Volleys BOTTROP but head coach Stelian Moculescu warns: “You simply can’t compare the quality of our opponents in the CEV Volleyball Champions League to the teams we play in the Bundesliga. However, this victory boosted our self-confidence and that is exactly what we needed.”

VfB FRIEDRICHSHAFEN is currently ranked third in the Pool after last week they lost to Poland’s Zaksa KEDZIERZYN-KOZLE at the tie-break to take one point from that game. “We have seen in that match that we are definitely improving since the start of the season and with our fans on our back we hope for a good result in the game with Galatasaray” Moculescu adds.

Galatasaray is a rookie in the competition and one of three Turkish teams – together with Arkas IZMIR and Halkbank ANKARA – participating in the 2014 CEV DenizBank Volleyball Champions League. “We have a good team and we want to live up to the trust that the CEV has showed in our team as we got a wild-card to compete in the Champions League” says head coach Ahmet Resat Arig.